To purchase general-admission or reserved seats for the Chevrolet Performance U.S. Nationals, log on to NHRA.com/tickets or call the NHRA Ticket Sales Center at 800-884-NHRA (6472). Tickets may also be purchased for the Top Eliminator Club (TEC), the ultimate VIP hospitality package featuring prime reserved starting line seating and exclusive autograph sessions. General-admission tickets for children 12 and younger are free with any paid adult ticket.

The most historic and tradition-rich event in the NHRA Mello Yello Drag Racing Series, the Chevrolet Performance U.S. Nationals has been contested annually since 1955, and its past list of winners includes “Big Daddy” Don Garlits, Shirley Muldowney, Don “the Snake” Prudhomme, John Force, Bob Glidden, Tony Schumacher, and Kenny Bernstein, among other NHRA legends.

In 2018, Terry McMillen joined the elite list of Top Fuel Indy winners when he defeated veteran Doug Kalitta in the finals. 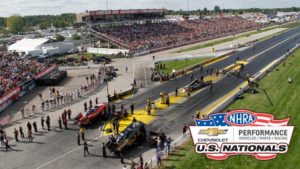 LE Tonglet locked-in his second Pro Stock Motorcycle victory at Lucas Oil Raceway taking down four-time world champion Eddie Krawiec.
The Chevrolet Performance U.S. Nationals also marks the end of the 2019 regular season and racers will be vying for points to earn a spot in the top 10 before the NHRA Mello Yello Drag Racing Series Countdown to the Championship begins. With an increased number of points in play due to the point-and-a-half system for this event, the drama on championship Monday is expected to be more amplified than ever.

The race also will offer thrilling competition in both the E3 Spark Plugs NHRA Pro Mod Drag Racing Series presented by J&A Service and the NHRA Lucas Oil Drag Racing Series, which will be highlighted by the annual Mopar Hemi Challenge for Super Stock cars. Additionally, the always popular Lucas Oil Muy Caliente jet cars will make appearances to thrill the crowds during the course of the weekend.