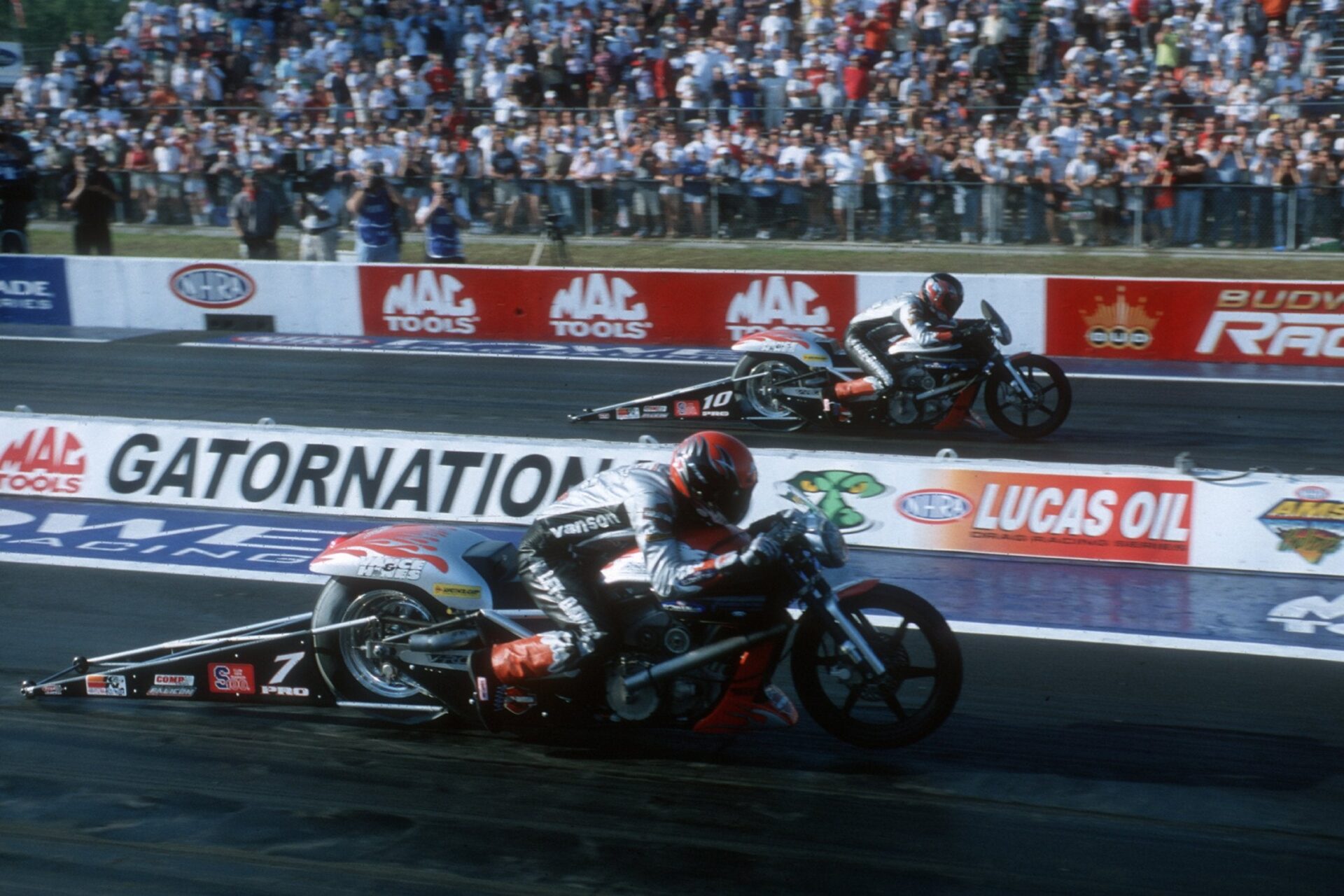 Who says the Harley-import rivalry is dead?

Andrew Hines vs. GT Tonglet in the historic 2004 Gatornationals final round. The first win for the Vance and Hines Harley V-Rod

Defending class champion Geno Scali scored first for the import contingent by motoring his Trim-Tex TL-1000 Suzuki to an early Friday pole-position with a 7.10, surpassing Matt Hines’ track record of 7.15.

The big news Friday was that three-time class champ Angelle Savoie (Sampey) failed to qualify during the first two sessions after tire-problems caused her to cross the center-line during session-one and brush the wall in session-two. “We had a collapsed tire-wall that was pulling me to the right,” Savoie said. “It was my fault for hitting the wall. I should have lifted but I kept fighting it, trying to get it back. It bruised my leg up pretty good.”

Savoie was able to get into the program in the number-13 spot with a pass of 7.24 on Saturday.

The run of day-two occurred when Vance & Hines Screaming Eagle V-Rod jockey Andrew Hines brought the Gainesville crowd to its feet with a pole-seizing blast of 7.09. “We’ve worked very hard on these bikes during the off-season,” Hines said. “It’s really paying off.”

Hines’ teammate G.T. Tonglet didn’t fall far behind as he ran the quickest pass of his career at 7.09 to defeat the Suzuki Hayabusa of Team Can Can’s Chris Bostick. G.T. Tonglet was the first rider of the Vance & Hines Harley-Davidson V-Rod when he was just 18-years-old.

“It’s great to be out here. We’re looking for good things this year,” 20-year-old Tonglet said.

Veteran Joe Desantis scored a holeshot win in round-one after his .019 light and 7.27 was enough to get his revamped Mark Conner-tuned Suzuki GSXR around Star Racing-backed newcomer Angie McBride’s (Smith) 7.21.