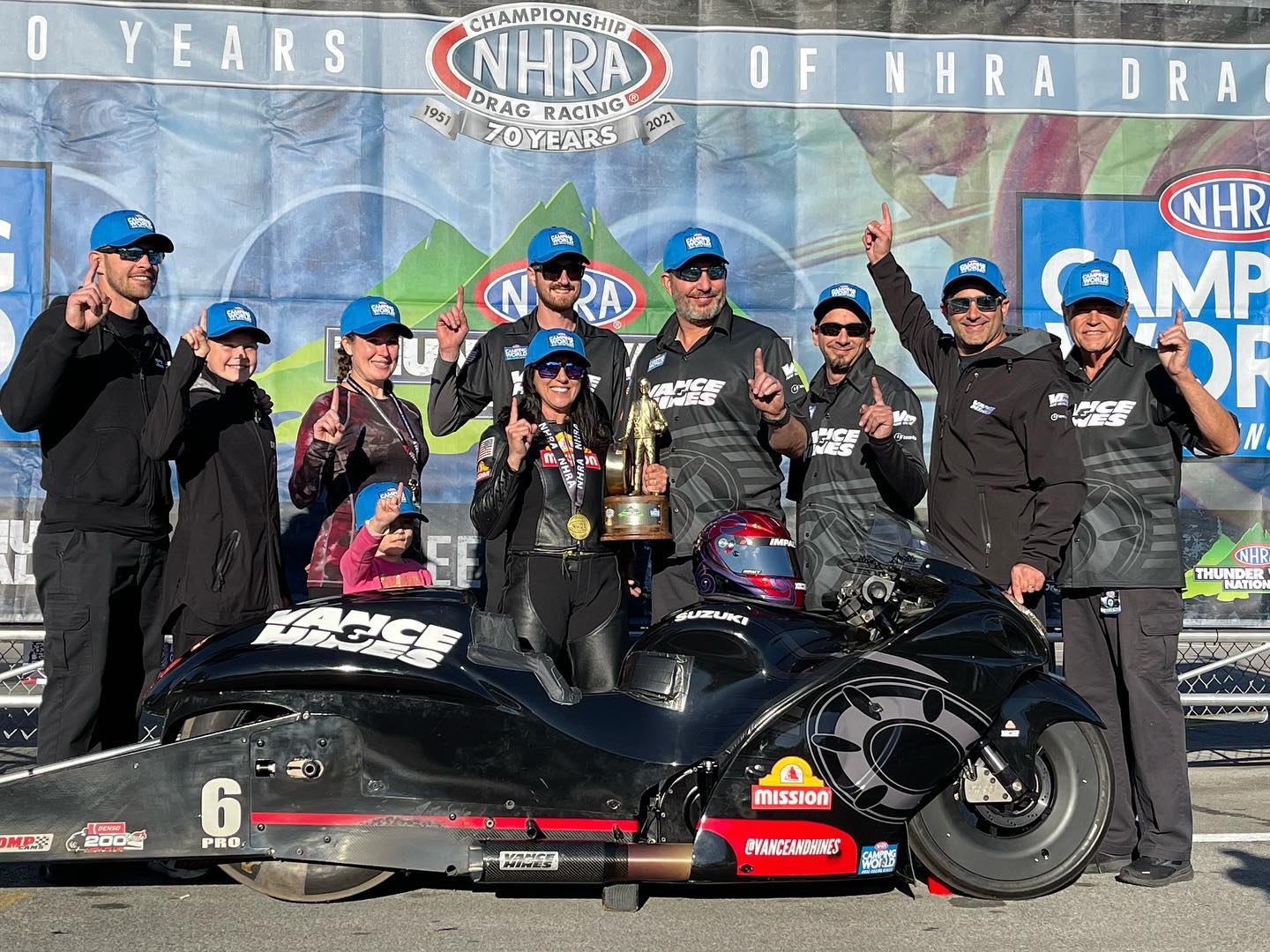 In an all-female final round at the NHRA Thunder Valley Nationals, Sampey used a .010 reaction time against Karen Stoffer, winning on a holeshot on her Mission Foods/Vance & Hines Suzuki with a pass of 6.773-seconds at 196.85 mph
Courtesy of NHRA | Josh Hachat

With her second win in the Countdown to the Championship, Angelle Sampey proved on Sunday at Bristol Dragway that she’s right in the thick of the championship conversation in Pro Stock Motorcycle.

In an all-female final round at the NHRA Thunder Valley Nationals, Sampey used a .010 reaction time against Karen Stoffer, winning on a holeshot on her Mission Foods/Vance & Hines Suzuki with a pass of 6.773-seconds at 196.85 mph.

It was enough to hold off Stoffer, who went a remarkable 6.760 on the quickest run of the weekend and gave Sampey her 45th career victory. It was her second playoff win this season and also pulled her with 25 points of Matt Smith with two races remaining.

The victory was also noteworthy for Sampey, as she became the first rider in Pro Stock Motorcycle to hoist a Wally at Thunder Valley. The class ran exhibition races at the track in 1999 and 2000 — and Sampey competed in both of those — but this weekend was the first official points race for the class in Bristol.

“I’ve been out here for so long, I’ve really learned to appreciate everything I get now,” Sampey said. “When I win a race, the emotions are 100 percent genuine because it’s a task to get it done. To get four round wins is really tough and it means so much to me. I love this sport so much and this team just works so hard. This mission was to catch back up in the points race and we made it happen. It was a fantastic day and it would be great to get the No. 1 back on the motorcycle.”

Sampey reached the championship rounds thanks to victories against her teammate, Andrew Hines, Chris Bostick and her other teammate, Eddie Krawiec. Bostick went red against her as Sampey struggled to a 7.075 that round, but Sampey was on point in the other two rounds.

She went 6.821 against Hines and then 6.814 against Krawiec, which was the quickest run of the weekend before Stoffer laid down her pass in the 6.70s in the semifinals. Sampey had to fight through some adversity, but that usually tends to bring out the best in the three-time world champion.

“It was tricky out there today,” Sampey said. “The biggest task was for me to get it straight down the track. I had to stay on the throttle against Karen. Going into first round, I was so nervous. But it seems like when I’m nervous, that’s when I usually do well. When there’s so much going on around me, it seems like that’s when I do the best on the racetrack. I’m so proud of Vance & Hines and that was a heck of a race in the final round.” 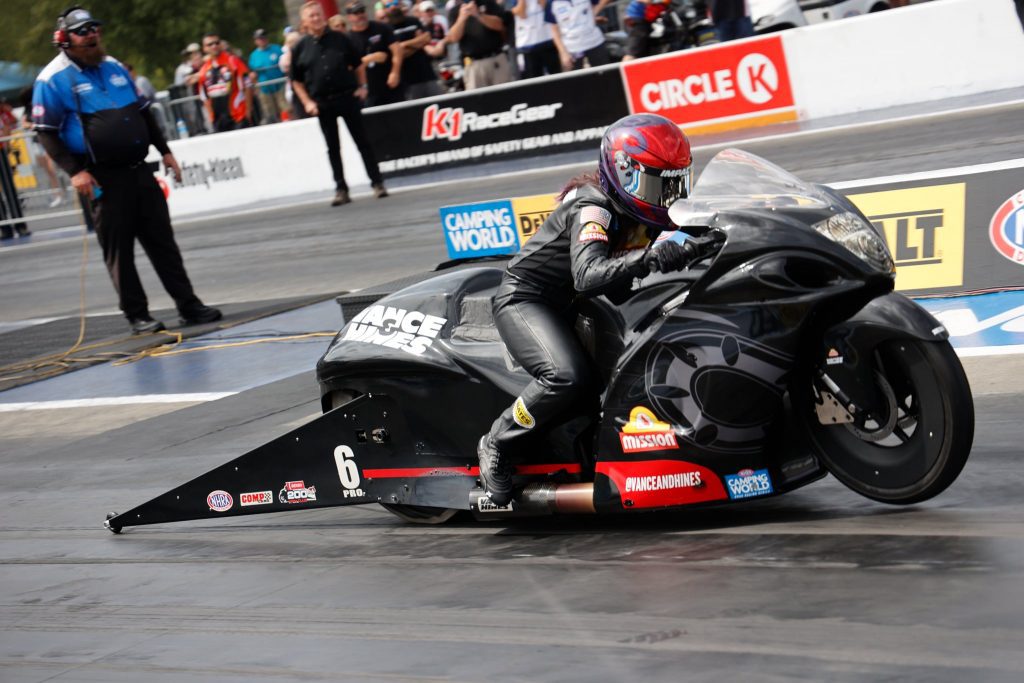 Stoffer’s road to the final round included a bumpy start, as a brutal reaction time in the opening round almost cost her. But Lance Bonham struggled and Stoffer moved on with just a 7.160. Given a golden opportunity, Stoffer took advantage and she was on her game the rest of the way, going 6.834 — with a .010 reaction time — in the next round against Ron Tornow.

She followed it up with a massive blast of 6.785 in the semifinals against Matt Smith, which was the first trip into the 6.70s in the class at Thunder Valley until the memorable final round. It was Stoffer’s second final round this season and 25th in her career.

Smith will take the points lead into Las Vegas, also holding a 56-point lead against Steve Johnson, who lost in the first round on Sunday.