The disappearances are interrelated, of course. With the XR no longer being much of a factor (for a variety of reasons), Harley-Davidson dealers itching to field a race team could either run an XR, run a different brand of motorcycle in AFT Twins (not likely) or AFT Singles, or watch from the sidelines.

These days, most are watching.

This all may be about to change, however, thanks to a couple of developments. The first is the debut of AFT’s Production Twins class as a championship division within the series in 2019. AFT Production Twins will be on the docket at 11 of AFT’s 18 events this season (with race number one happening this weekend in Texas) and will crown a champion – complete with a Number 1 plate and Tommy Duma Fine Jewelers-designed championship ring – when all the racing is said and done this fall.

The other is the availability of an early-generation XG750R race bike to a Harley-Davidson dealer, in this case Black Hills Harley-Davidson and its General Manager and co-owner Terry Rymer, who currently runs a Yamaha-based AFT Singles team out of the Black Hills H-D shop with rider Dawson Schieffer (who broke his hand at the Dixie Speedway round last month). 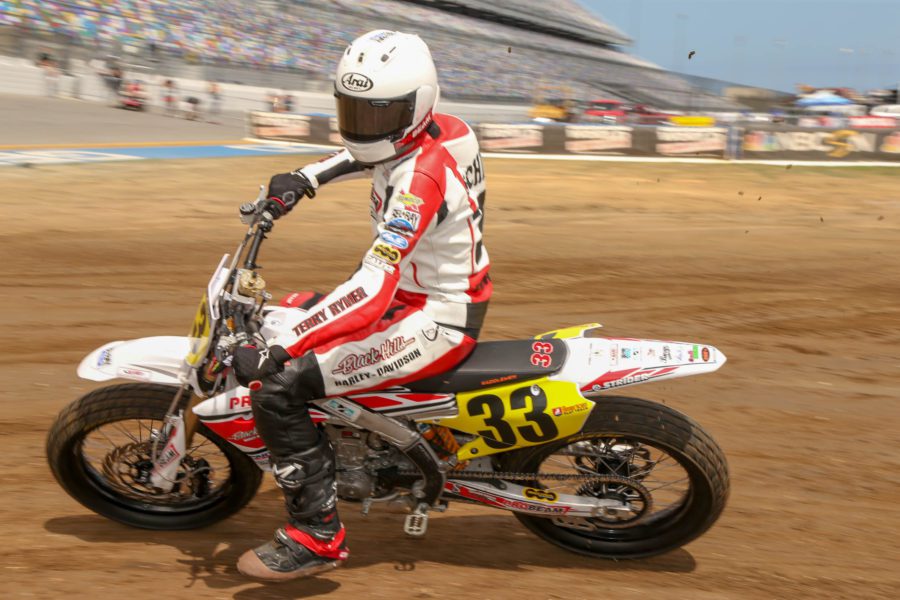 With Black Hills Harley-Davidson AFT Singles rider Dawson Schieffer (above) out for a few races with a broken hand, Black Hills General Manager Terry Rymer tagged Danny Eslick to fill in – which led to Rymer putting a deal together to have Eslick also ride an early-generation XG750 at the Texas Half-Mile. Should be interesting. Scott Hunter photo.

With the first-generation, 2017-spec XG racer legal for the AFT Production Twins class (as opposed to later-gen XGs that use non-standard cylinder heads and throttle bodies, making them legal for AFT Twins only, like the XR750 and FTR750), Rymer’s plan at this point is pretty simple – and thoroughly experimental: borrow a bike from Vance & Hines, put an experienced rider like Danny Eslick in the saddle, and see how it goes in Dallas against the Kawasakis and Yamahas in AFT Production Twins at the Texas Half-Mile.

“The whole thing came together on a bit of a whim,” Rymer told us. “I was talking to the AFT folks about our plan to have Danny Eslick substitute for Dawson on our AFT Singles Yamaha in Texas and maybe Arizona while Dawson’s hand heals up, and the subject of the new Production Twins class came up. Someone said something like, ‘wouldn’t it be cool if Eslick was able to ride one of the older XG race bikes in the new class … and we all sorta paused for a few seconds because [laughs] it wasn’t a bad idea.

The plan, then, is basically this: Rymer’s crew – led by Tim Pfisterer – will take delivery of the bike at Texas Motor Speedway and work to put Danny Eslick – who will also ride AFT Singles on the Black Hills Yamaha YZ450F – into the Production Twins Main.

“It really does make sense for us,” says Rymer. “I mean, we’re a Harley-Davidson dealer, and a big one, and we’ve been running Yamahas in AFT Singles. Don’t get me wrong; I’m a Yamaha fan from way back in addition to being a dyed-in-the-wool Harley guy and businessman. But being able to run a Harley-Davidson racing motorcycle in American Flat Track, the world’s premier dirt track racing series? Wow. That’s just the perfect scenario, and we’re all very excited about it. Hey, when opportunity knocks, you answer the door!

“It’s really good for us,” Rymer adds, “and it’s good for Harley-Davidson and Vance & Hines, too. It’s also good for the class, which is a great stepping stone for up-and-coming AFT riders and teams. Heck, having more Harley dealers involved again would be a great thing. And that’s the big picture from my point of view.”

Four-time Daytona 200 winner Eslick is jacked up about the opportunity, too. “Terry [Rymer] and I had been talking about me riding the team’s Yamaha AFT Singles bike,” says Eslick, “but then he brought up the Production Twins thing on the XG – and you don’t say no to something like that! Riding two classes in Texas will be fun; the AFT Singles class is so competitive this year, and getting back on a 450 with all those really fast younger riders will be a gas. But it’ll also help me in the Production Twins class because I’ll have the benefit of all those extra laps, and extra knowledge about the track.” 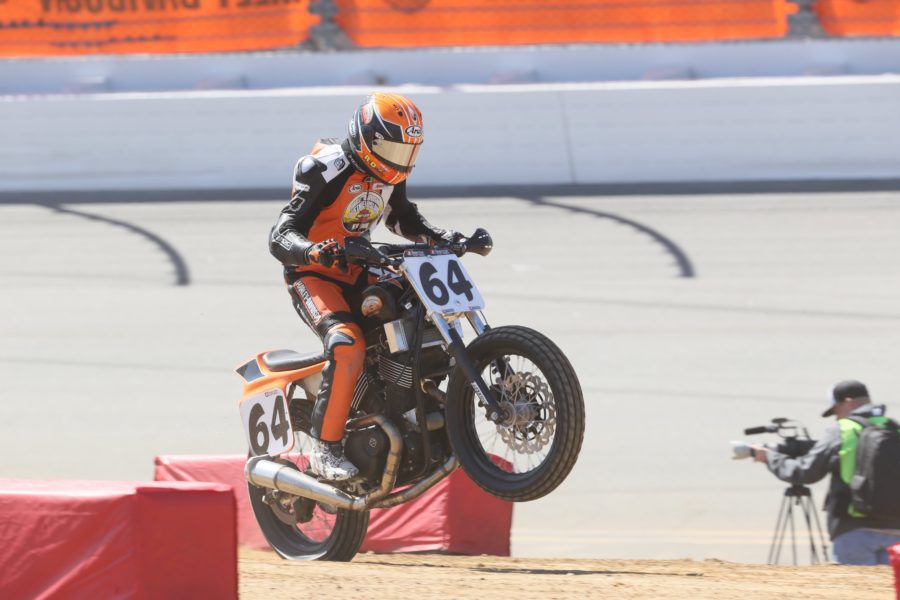 Eslick rode a dealer-sponsored and -prepped XG at Daytona in 2017, so Texas won’t be the first time the 4-time Daytona 200 winner will have thrown a leg over one in anger. Brian J. Nelson photo.

The Texas Half-Mile won’t be Eslick’s first time on an XG. He rode a privateer XG in the DAYTONA TT in early 2017 on a team supported by Harley-Davidson of Staten Island. The team had some mechanical issues and Eslick didn’t do too well, “but at least Texas won’t be the first time I’ll have ever thrown a leg over an XG,” he says.

So yes, it’s been a while since Harley-Dealers were involved in professional flat track racing in a big way. But thanks to some innocent banter and motorcycle-industry friendships forged over the years, that might be changing – and sooner than you think.

The Texas Half-Mile is this coming weekend, folks, and it’s gonna be a barn-burner.

Danny Eslick is sponsored by Arai Helmet and Alpinestars 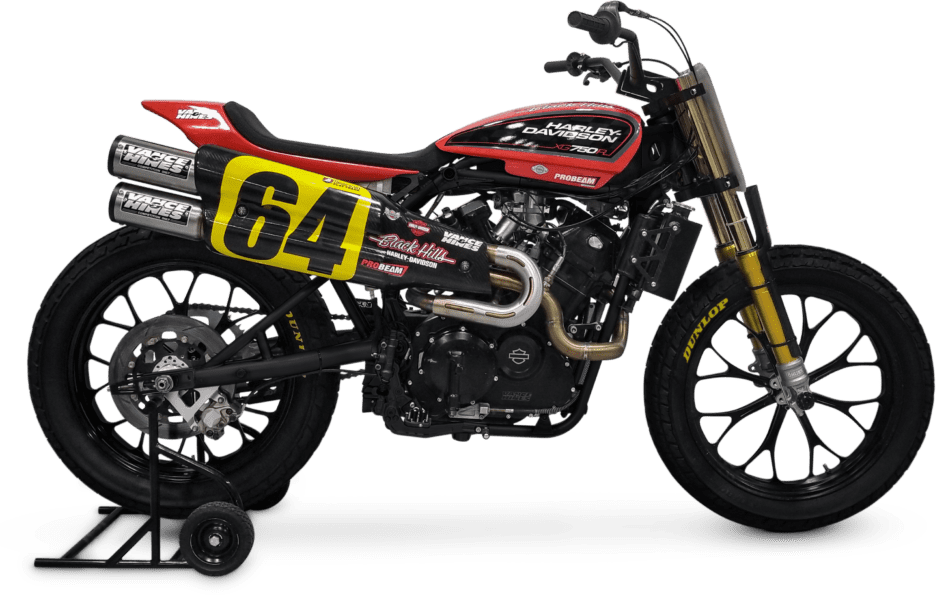