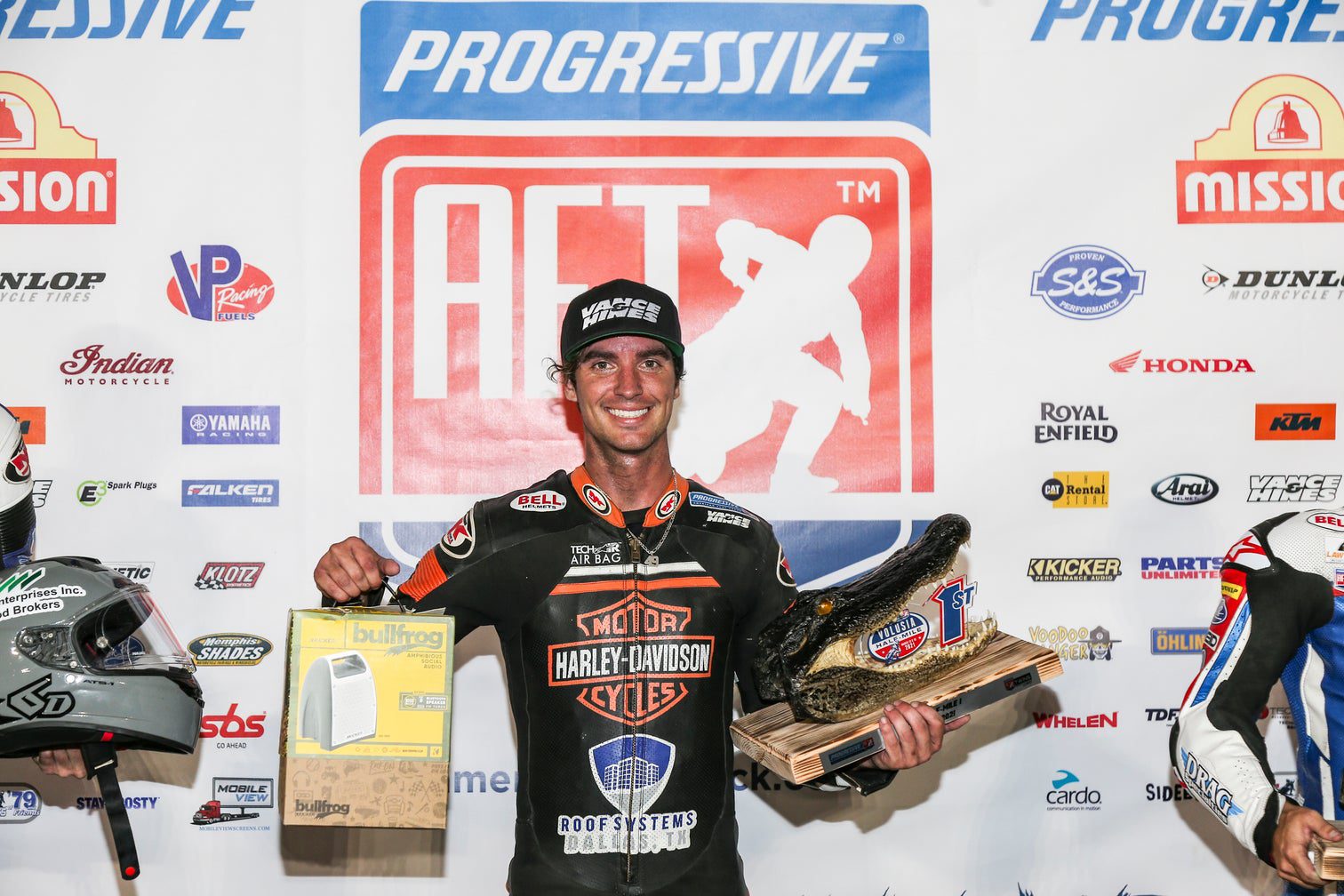 Courtesy of American Flat Track
The very first Main Event of the ‘21 Progressive AFT season set the bar sky high for the year ahead. No less than three riders held first position on the race’s final lap of the AFT Production Twins presented by Vance & Hines Main with an opportunistic Chad Cose (No. 49 Voodoo Ranger/Roof Systems Harley-Davidson XG750R) ultimately sneaking away with a shocking victory.

Cose led for the opening seven minutes plus of the eight minute + two lap Main before Dan Bromley (No. 62 Memphis Shades/Vinson Construction Yamaha MT-07) made his move. The ex-premier class contender dove underneath to claim the lead and quickly worked a bit of separation in what very much felt like the race’s decisive maneuver at the time.

However, 2019 class champ Cory Texter (No. 65 G&G Racing/Roof Systems Yamaha MT-07) had other ideas. Texter, who started deep in the field with the last pick of the third row, spent almost the entire affair clawing his way up the order and slowly working into contention of what was previously a two-man fight.

Texter swept by Cose with one lap remaining and then overhauled Bromley on the last lap. Unwilling to give up the win that easily, Bromley immediately retaliated. The two made contact with less than a half-lap remaining, opening the door for Cose to power his way by both and claim the checkered flag at the last moment.

“It’s never luck at this level,” Cose said. “You’ve got to have the ability to do it. I felt great all day; there’s a couple things I felt we could have changed, but all in all (I’m happy). These guys were as hungry as I was — I think you could tell by the aggression that we all had out there. This is what you have to do to win races.

“I was a little disappointed they got by — I made a couple mistakes — but luckily I was there to capitalize in the end. I think any one of us three could have won. I’m just glad we put on a show for the fans.”

Dalton Gauthier (No. 79 D&D Cycles/Vance & Hines Harley-Davidson XG750R) came home a distant fourth after battling for the lead in the race’s early stages, while an impressive Cameron Smith (No. 44 Fredericktown Yamaha/Richie Reynolds Racing MT-07) rounded out the top five, adding to the evidence that the class could have something of an altered flavor in 2021.