The August Manufacturers Cup race has been circled on Team DME’s calendar all year…. After all, as the title sponsor for the third stop of the Man Cup tour it went without saying that the team hoped to have an outstanding weekend. It would also be a very big weekend for DME as it would be the first time all year they have had 5 official bikes entered in competition.

Saturday’s first qualifying session got underway as the heat of the August sun started heating up the track. In what has seemingly become a trend (great for Team DME but not so great for their competitors) ace rider Joey Gladstone found himself sitting in the familiar number one spot after the first qualifier in Pro Street with a stout 6.90 at 207mph. It wasn’t all smooth sailing though, as teammates Terrence Angela and Jason Dunigan had less than ideal first qualifiers with Terrence fighting traction issues and Jason not being able to take the tree under power.

But before heading back to the trailer to access the Pro Street bikes DME had to also make qualifying passes with their Pro Open and Real Street entries. With the all motor combination in the Real Street bike the team knew they would have to make a drastic change in their setup to get what power they could squeeze out in the summer heat. They pushed it quite a bit and actually got the bike to wheelie hard enough for Joey to lift and abort the first qualifier. With lots of work to be had the team decided to forego the first Pro Open qualifier on “Tink Tink” bike and get to work on all the bikes.

Second round came up and it was almost a mirror image of the first round. Joey improved upon his time in Pro Street to remain number one with a 6.86 at 212mph. Meanwhile Jason Dunigan was able to make it down the track despite multiple wheelies to run a mid seven second pass while Terrence spun on the hit. Skip and Andy took some power out of the Real Street bike and successfully cured their wheelie issue only to run into a shifting issue after some killer short times. With their plates full the team once again decided to wait to run the Pro Open bike until the final qualifier.

In what would be a huge turn of events for the team Gladstone would not improve upon his 6.86 and actually get bumped by former Pro Street champion Rodney Williford by virtue of his 6.831 pass. Angela and Dunigan made some small improvements to move up a few spots for the Sunday ladder.

Confident that they had the shifting issues resolved on the Real Street bike the team decided to make the most of the cooler evening temperatures and unleashed a new all motor record with a 7.805 at 173mph. With the relief of finally making it down the track in Real Street off their shoulders, the team quickly hustled to get the Pro Open bike to the lanes for the final qualifier. Not wanting to push the bike too hard the orders were given from team boss Dimey Eddinger to run the bike to the 1/8th mile and shut it down…. This still resulted in a fairly quick pass of 7.37 at ONLY 145mph!

The team worked late into Saturday night to make sure all five bikes were locked and loaded for Sunday eliminations. They continued to work with Jason and his bike during the Saturday night grudge session and after a 7.15 pass they were ready to go for first round. The weekend had been up and down to this point and they hoped to shake off everything and put on a show for all the fans during eliminations.

The team brought their A game on Sunday and all three riders quickly dispatched of their competitors during the first round of Pro Street action. Next up would be the popular Pro Open class and this time DME flexed their muscles to put down the fastest pass of the weekend with a 6.601 at 217mph to take the round one win. Closing out the action packed first round would be Gladstone taking the Real Street win and backing up his new class record.

Thoughts of the “perfect” weekend were dashed in second round as Dunigan was unable to combat Rodney Willifords quickest pass of the round. Angela and Gladstone did however move on, setting up a DME semi-final between the two riders. In Real Street action Skip and Andy tried to combat the August heat but just didn’t have the power to overcome Anibal Merced’s quickest pass of the round. However Joey quickly rebounded to rip off another 6.60 pass in Pro Open which was definitely needed in one of the closest races of the weekend as Mark Rendeluk put together a stout pass of 6.65.

As usual no team orders of any kind were talked prior to the Gladstone/Angela matchup in the semi-finals of Pro Street. But Angela had plans of his own feeling as if he might need a starting line advantage to dispatch of his teammate. Pushing the tree just a little too hard Terrence went -.003 to turn on the red light and advance Joey to the Finals. The “brain trust” of DME (Dimey, Andy, and Skip) got together before the final round and decided they had no choice but to roll the dice against red hot Rodney Williford who had been consistently in the sixes all weekend. It was a smart decision and much needed as Rodney streaked down the track on yet another six second pass unfortunately the team couldn’t keep all their power hooked up and lost to the former champ.

There was no time to second guess their decision as they quickly got their Pro Open bike to the lanes for a matchup with the wildly unique Turbo Harley combination of Pete & Keith Browne. The Harley quickly shot out to the 60 foot cone but the DME power was already ahead and putting bike lengths down by the time the second cone was reached. Joey powered through for the event win and third consecutive pass in the 6.60s.

Team DME will continue to push the envelope and improve all three of their combinations and look forward to the final push of the 2015 season… They will also seek the allure of winning two, maybe even three pro classes in one weekend. 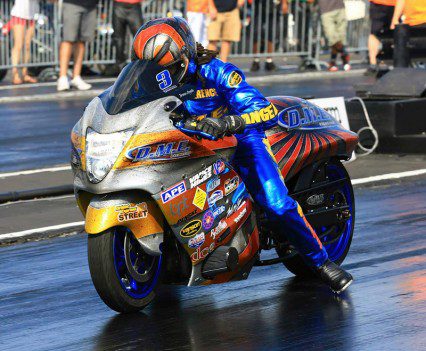 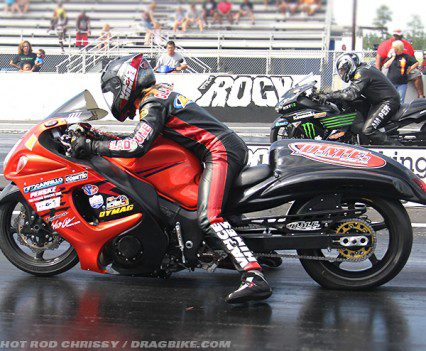 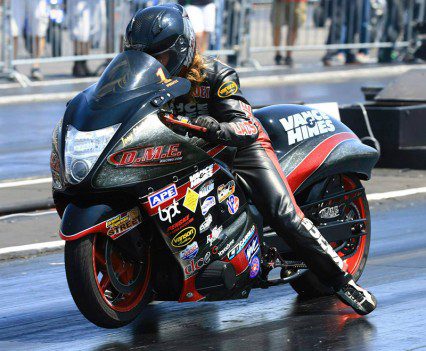 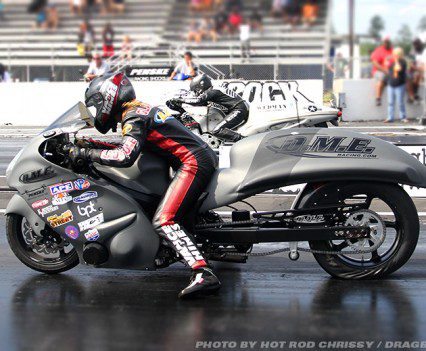 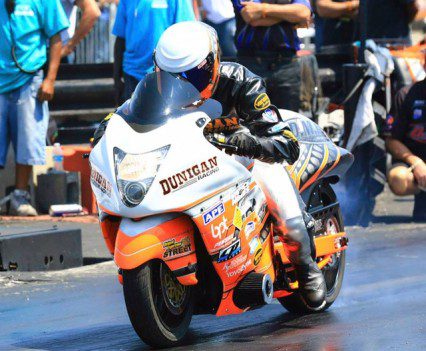