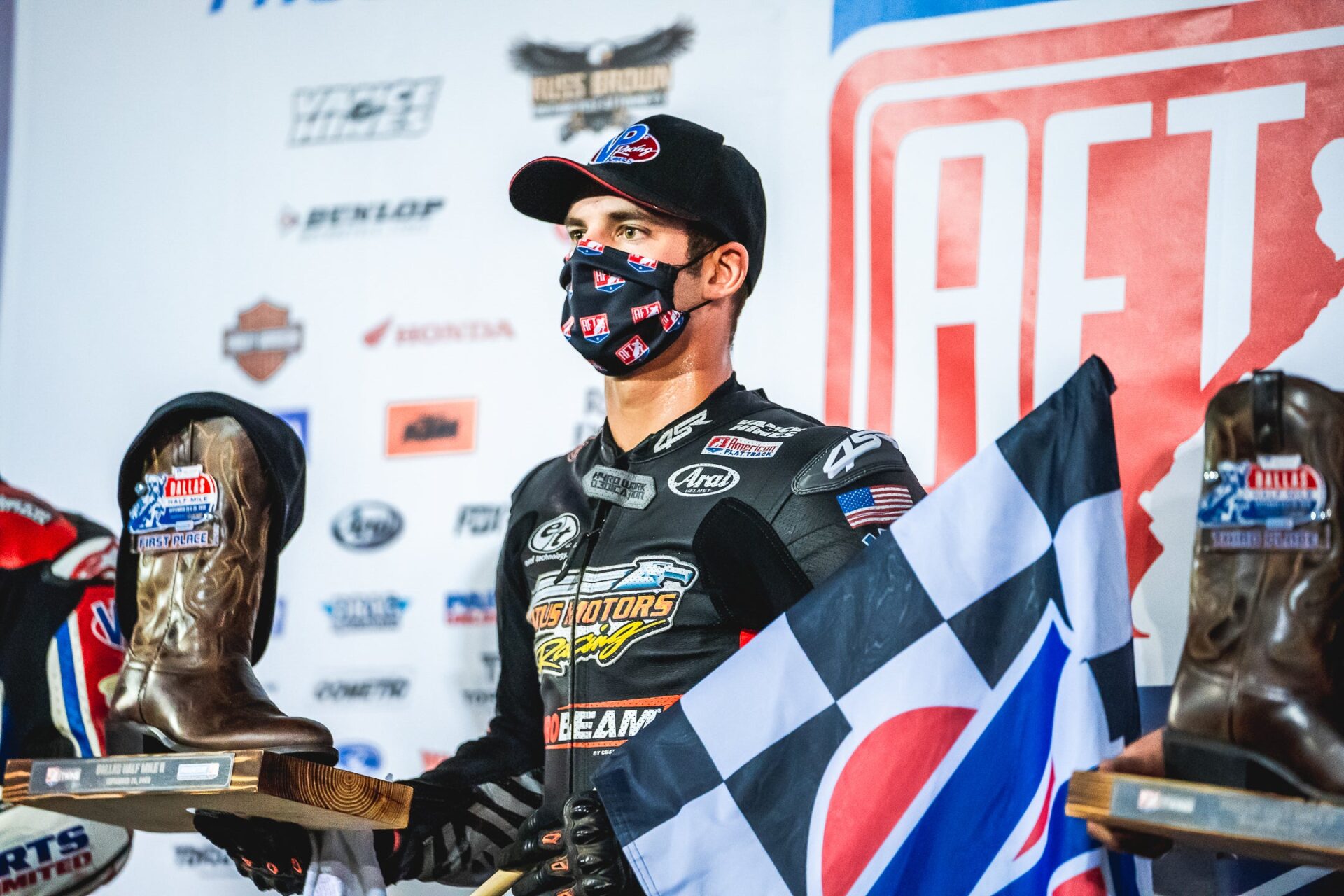 FIVE-WIN STREAK IN THE BOOKS

This victory was not as easily earned as it sounds, however.

Cory Texter (No. 1 G&G Racing/Roof Systems Yamaha MT-07) rode like a reigning class champ and executed a perfect launch from the inside starting position, successfully translating the holeshot into an extended run at the front.

Texter continually fended off a stalking Rispoli, who repeatedly looked for a way up the inside of his rival as the two ripped away from the rest of the pack.

Texter managed to keep the fleet Rispoli corralled behind him until just after the half distance flags flew. At that point, the champ ran slightly wide and that was all the invitation the current title leader required.

Rispoli put his XG750R into first and immediately went into super cruise mode, blasting away at the front.

That pressure transformed into chaos when Varnes’ front wheel contacted Duffy’s rear wheel, sending Varnes over the bars. The incident brought out the red flag with just over two minutes remaining, giving the field another shot at ending Rispoli’s win streak.

Unfortunately for them, Rispoli held on to the lead as they left the staggered start and immediately started throwing in the Main’s fastest laps. Texter did well to keep him honest, but ultimately, it added up to a fifth consecutive AFT Production Twins victory for the two-time AMA Pro SuperSport champion.

“I’m stoked that Cory was able to put up a massive, massive challenge tonight,” Rispoli said. “He rode really well. This wasn’t easy at all. The track was hard and technical.

“I’ve got to take my hat off to my team. We weren’t the fastest guy, and we had to come a little bit from behind, and they were able to get it done. Five in a row… This is a dream season.”

Cose beat Duffy off the line at the restart to collect third. Duffy was dropped a couple more positions before it was over, as Rispoli’s fellow former road racing national champion, Danny Eslick (No. 64 Scott Powersports/R&D Machine Kawasaki Ninja 650) slid past claim fourth while Dylan Bell (No. 31 Wayne Moore/Martin Trucking Harley-Davidson XG750R) got by as well to round out the top five.

Despite his heavy fall, Varnes not only made the restart, he raced his way up from the back of the field to finish seventh.

This weekend’s races will air on NBCSN on Saturday, October 3. The Roof Systems Dallas Half-Mile I presented by Law Tigers will air at 3:00 p.m. ET/12:00 p.m. PT, with the Roof Systems Dallas Half-Mile II presented by Law Tigers airing later that evening at 9:30 p.m. ET/6:30 p.m. PT. The broadcasts will include exclusive features and onboard footage, along with the expert commentary of Progressive AFT legend Chris Carr. 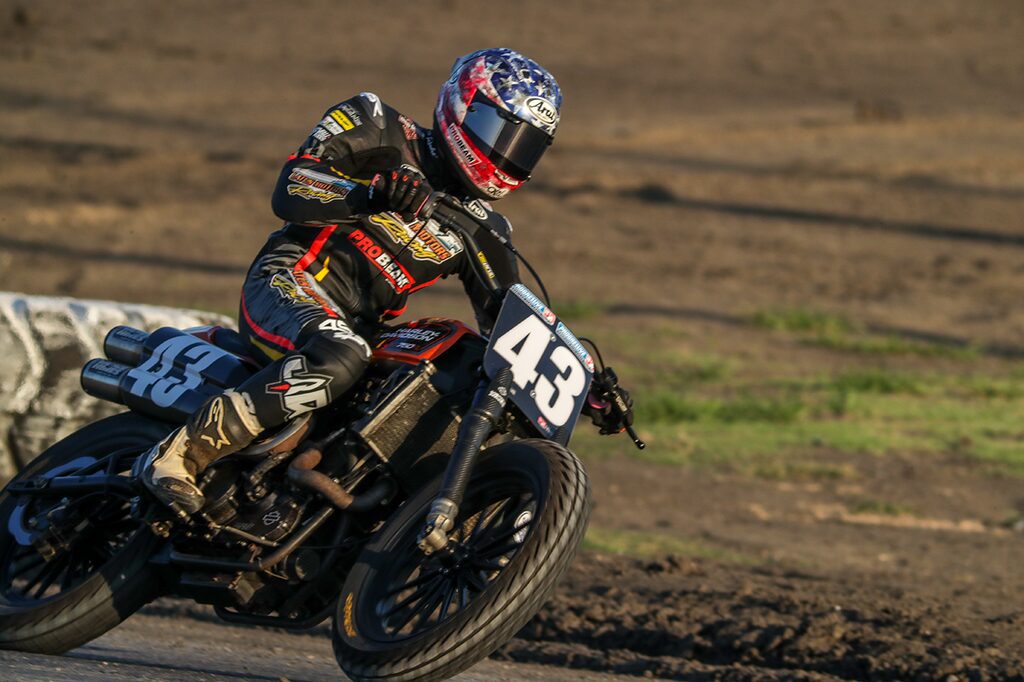 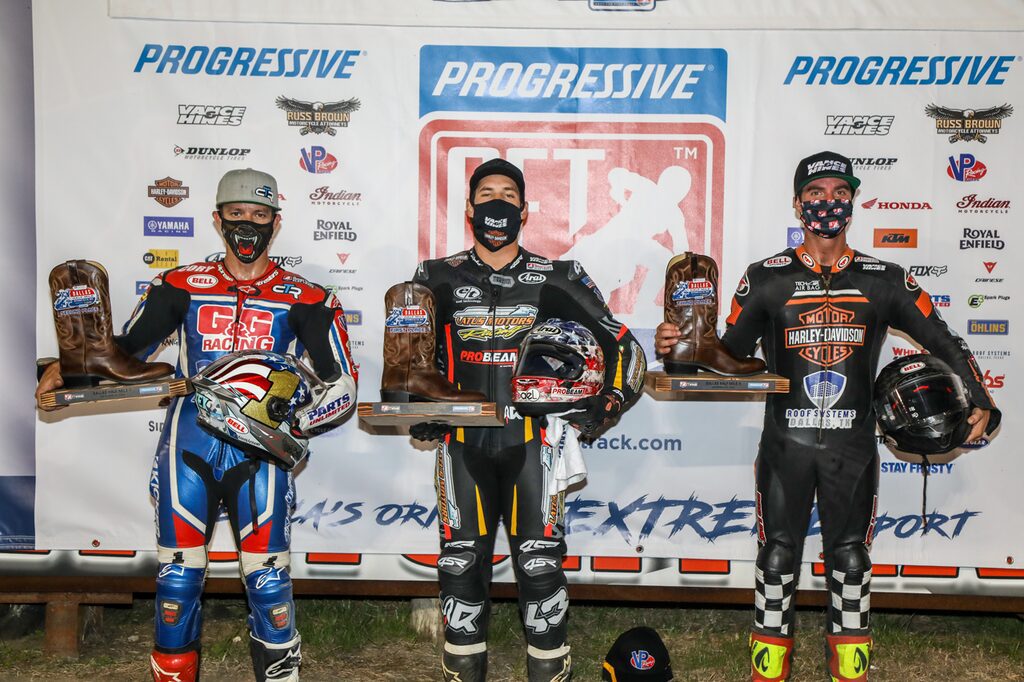