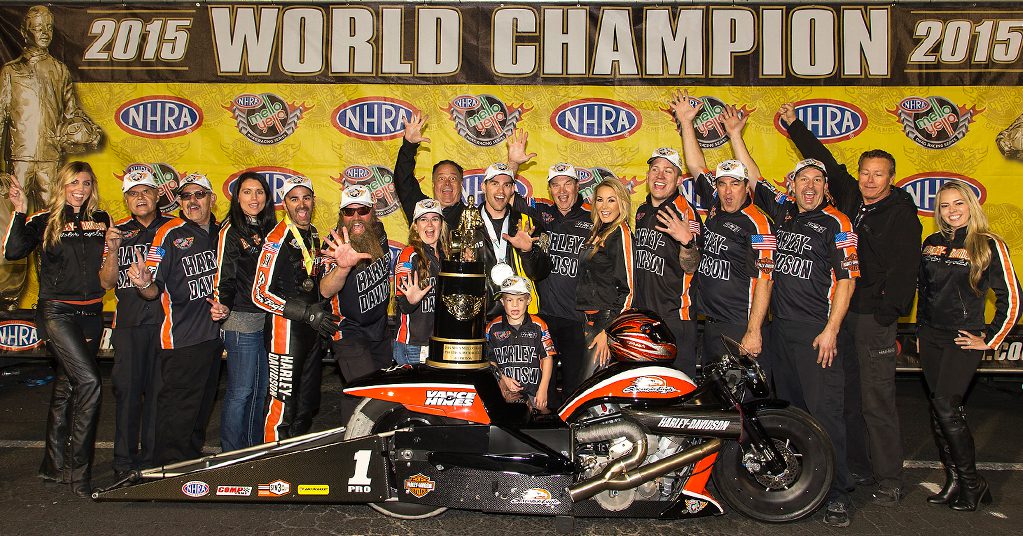 With Hines and Krawiec at the controls of the team’s Harley V-Rod bikes, the Harley-Davidson Screamin’ Eagle/Vance & Hines riders finished 1-2 in the standings for the second consecutive year, and have collected eight of the past 12 NHRA Pro Stock Motorcycle world championships.

Hines clinched his championship with a win in the second round of eliminations on Sunday.

“My outstanding Harley-Davidson team did a great job of keeping me focused and keeping the pressure off of me this weekend,” said Hines, who at 32 years old is the youngest NHRA Pro to win five world championships. “My V-Rod was always on point. Having five championships is pretty awesome.”

Andrew Hines, the son of NHRA Hall of Famer Byron Hines and younger brother of three-time Pro Stock Motorcycle world champ Matt Hines, is the first rider to win five Pro Stock Motorcycle titles since the late Dave Schultz reached that mark in 1994. Hines won four events during the 2015 season, including three in the six-race Countdown playoffs as he climbed from the third seed to take the title. Hines has 42 career wins, second place all-time in Pro Stock Motorcycle behind Schultz, who tallied 45 victories during his career.

“Each one of my championships has been a unique experience,” said Hines. “This is a really competitive class right now, and we struggled in the middle of the season. This is our team’s reward for all the late nights and hard work it took to get us back out front. The Harley team rises to the occasion every time.”

Krawiec finished second in season points, 43 behind Hines, after starting the Countdown as the first seed. The final-round victory by Krawiec at Pomona was his fourth of the season and the 31st of his career. Krawiec has now appeared in eight consecutive final rounds at Pomona. Krawiec got a big win in round two over Jerry Savoie to help secure the championship for Hines, and then defeated his teammate in the semi-finals.

“It was a great weekend all-around for the Harley team,” said Krawiec, a three-time Pro Stock Motorcycle champion. “My V-Rod was fast today but lagged a little off the line until we made an adjustment for the final round and that’s what won it for me. Our combination of strong V-Rod motorcycles and a team with outstanding talent and deep experience is hard to beat. I’m always racing for another championship but it’s a happy ending when the team can send that world champion trophy back to Milwaukee.” 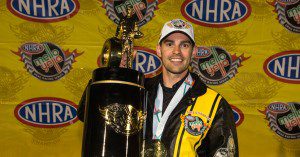 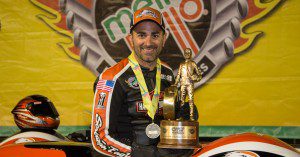