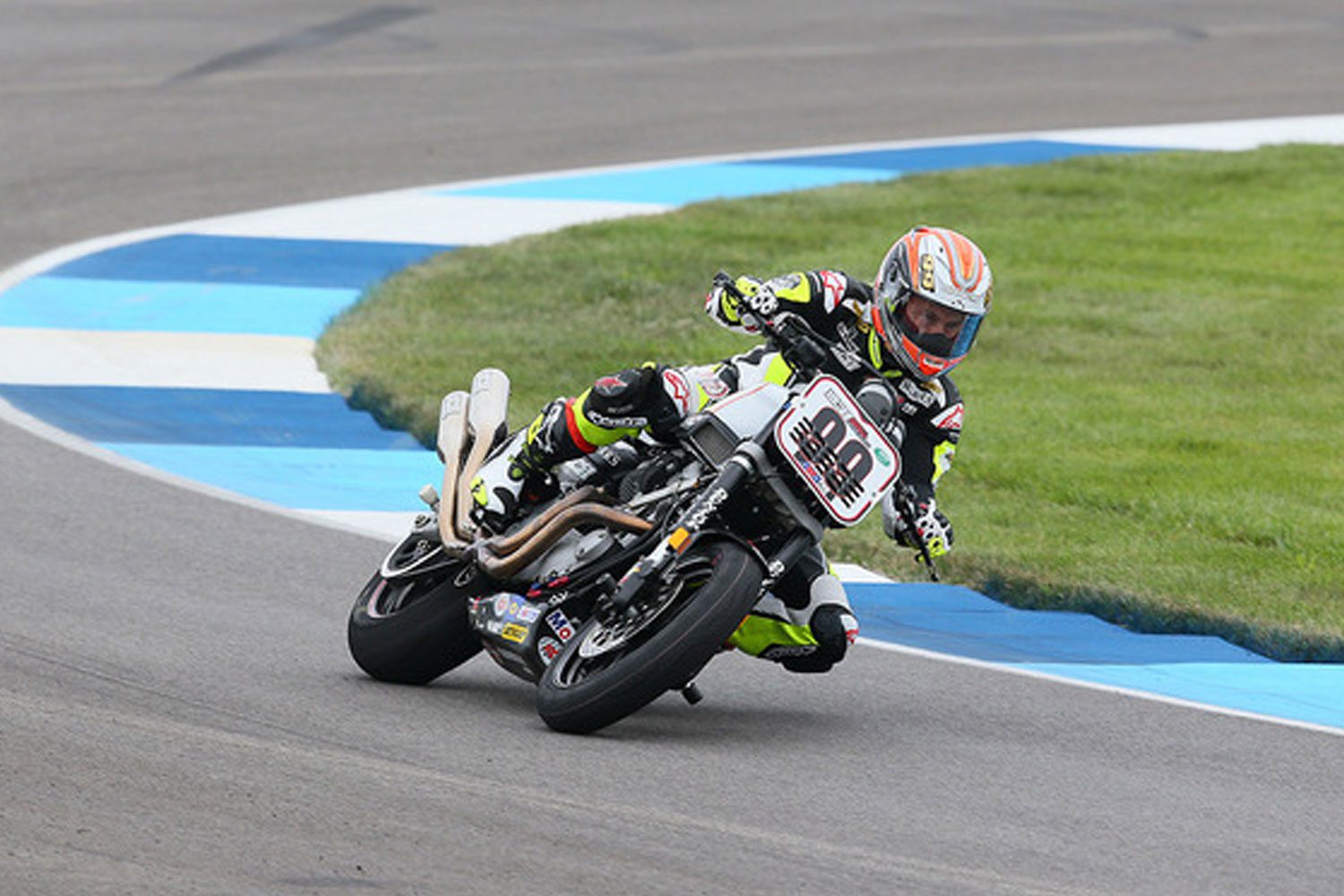 Courtesy of AMA Pro Racing INDIANAPOLIS (Aug. 8, 2014) – Former Grand Prix star Jeremy McWilliams secured the pole position for this weekend’s AMA Pro Vance & Hines Harley-Davidson Series doubleheader at the Red Bull Indianapolis GP. The Harley-Davidson of Bloomington wild card entry showcased the familiar skills GP fans have long associated with the No. 99, even if the big XR1200 the number plate is adorned to this weekend is far removed from the prototype machinery on which he originally earned his reputation. McWilliams, who earned a victory in last year’s Brickyard doubleheader, set the pace in the morning practice with a quick lap of 1:50.037. He then backed that performance up by topping qualifying at 1:49.370. “Indy has been really good to me,” McWilliams said. “And I have a really good team behind me. Bloomington are such an enthusiastic mob and it didn’t take much to come back. When they said we’ve got an entry, I didn’t think twice about it. The bike really worked well last year and we haven’t touched it. It actually hasn’t left the shop. That’s its first outing of the year. So it’s nice to be competitive on it.” McWilliams will be joined on the front row by Suburban Motors Harley-Davidson’s dual threats, Steve Rapp and Ben Carlson. Defending champ Rapp was a mere 0.063 seconds behind McWilliams with Carlson just another 0.057 seconds in arrears. In fact, the front two rows were within a second of pole with championship rivals Danny Eslick on the Ruthless Racing XR1200 and Josh Chisum Racing/Bartels Harley-Davidson’s Tyler O’Hara set to open the weekend’s two critical races from fourth and sixth, respectively. Sandwiched in between is young Gage McAllister, who demonstrated his ability to exploit the draft en route to a Daytona podium in the season opener. The front runners are all predicting a spectacular race with times tight, speeds high and tire life in question. “After about five laps we have a big drop off,” McWilliams explained. “I think that’s maybe just to do with the rubber on the track at the moment, and that might get better as the weekend goes on hopefully. But pole position really doesn’t mean much. It really depends on how well you manage the tire over race distance at the moment. It is only a ten-lap race, but as far as I remember, it’s a pretty hectic ten-lap race. “I expect these guys – Steve, Ben, Tyler and Danny in particular – to be tough. It’s going to be tight. You couldn’t really call it. Last year I was just in the right place at the right time. When you’re as close as four or five together, first place can go to fifth.” Second qualifier Rapp thinks he has more speed in the bike. “The bike was good,” Rapp said. “I made a little mistake on my fast lap coming through on the fast left-handers. You only get like two or three fast laps so I wasn’t able to recover from that. But it’s good. It should be a fun race.” Teammate Carlson knows he’s strong at Indianapolis. “Indy has always been good – we’ve run good here for years,” Carlson said. “I’ve been on the box a couple times throughout the last three years. I feel like we’ve got everything working as good as we can at the moment and I feel good. I feel like I have a bike that can get up front.” Kyle Wyman heads Row 3 on the KWR/Millennium Technologies bike, followed by brother Travis Wyman aboard the Harv’s Harley-Davidson XR1200. Wyman’s teammate, PETRONAS-backed Malaysian newcomer Ramden Rosli, rounds out the row after quickly adapting to the big twin. ChiliPepperRacing.com’s Hayden Schultz completed the qualifying top ten. Saturday’s 10-lap contest is scheduled for a 4:20 p.m. local time (1:20 p.m. PT) start.