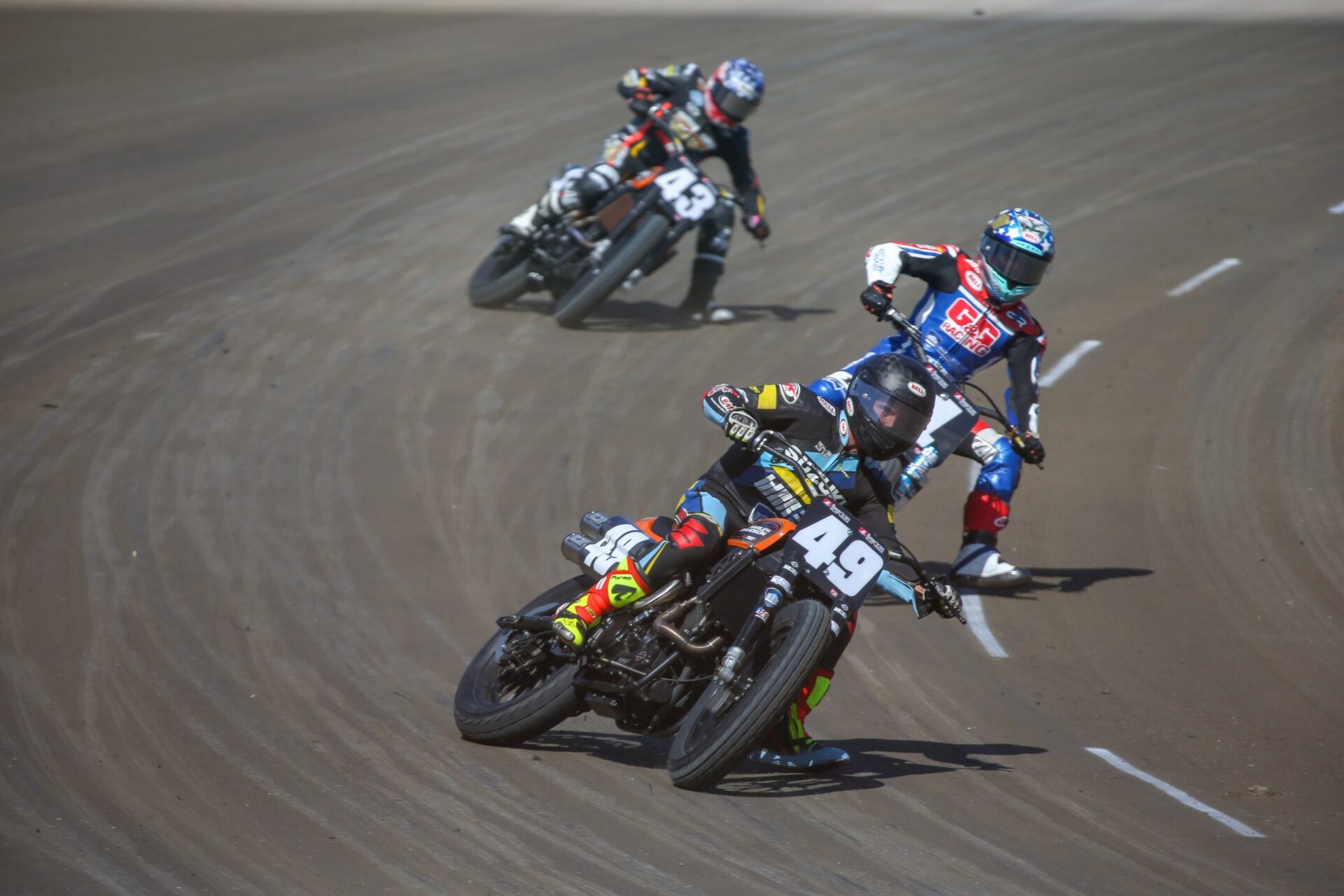 Kitchen spent almost the entire race as a fairly anonymous member of the second pack, while veteran riders Henry Wiles (No. 17 RMR Honda/Honda Talon CRF450R) and Mikey Rush (No. 14 Estenson Racing Yamaha YZ450F) did battle at the front.

Although Wiles and Rush held a solid advantage over the rest of the field for much of the race, they were joined late by the newest member of the RMR/American Honda family, Michael Inderbitzin (No. 54 RMR Honda/Honda Talon CRF450R).

Inderbitzen made it a three-rider affair with two minutes remaining on the clock and immediately started trading haymakers with Wiles and Rush. He dove into the lead entering Turn 1 on the final lap in hopes of taking the win in his first attempt on RMR machinery.

However, Kitchen reeled in the group just in time to grab the draft as the last lap got underway. He then somehow proceeded to leap from fourth place to first as the group slid into Turn 3 and then got a stellar launch off of Turn 4 as he raced to the checkered flag.

That exit proved just strong enough to hold off Wiles, who came up 0.019 seconds short of drafting back past at the stripe. Rush finished third, a scant 0.083 seconds off the winner himself.

After the race, an ecstatic Kitchen said, “I wouldn’t say it was a strategy (to hang back and strike late) — that was just kind of pure luck. I came from the third row and did not think I was going to have a shot at the win. But those last five laps I thought, ‘I might actually have a shot at this.’

“In Turn 3, I got a really good draft around all three of them and thought, ‘This is going to be good.’ I knew I had to sweep down the front straightaway so they didn’t have a good chance to draft me, and I heard them coming around the outside. I gave that Vance & Hines twist throttle just a little bit more and got it done.”

Kitchen’s win actually sees him leading the early-season title fight with 52 points to Rush’s 49. Max Whale (No. 18 Coondoo Cattle Co./Australian Road Services Kawasaki KX450F), the winner of the season opener, is third with 48 points after finishing seventh on Friday night.

Lowe put himself at the front of a five-rider pack early and continued to press from there as that group slowly whittled down over the course of the ten-minute plus two-lap shootout. The Michigan native overhauled pre-race favorite Chad Cose (No. 49 Wally Brown Racing Harley-Davidson XG750R) in the race’s opening stages before falling into a back-and-forth tilt with Nick Armstrong (No. 60 Lessley Brothers Racing/Competitive SheetMetal Yamaha MT-07).

Unfortunately, Armstrong’s hopes of securing his first win since standing atop the GNC2 podium at the 2015 Indy Mile ended in disappointment due to a mechanical issue with less than two minutes on the clock.

Lowe’s career-first victory wasn’t assured quite yet, however, as a streaking James Rispoli (No. 43 Latus Motors Racing Harley-Davidson XG750R) was still on his case.

Rispoli, who was the fastest qualifier, was forced to use a provisional after his bike failed while leading his Semi. Despite starting dead last, the former roadracing superstar made up serious ground in a hurry with a brave exploitation of the high line on the opening lap, climbing from 17th to 4th in a matter of three corners.

After Cose slipped off the groove and dropped several bike lengths back, Rispoli spent the bulk of the race in third, sitting just inches behind the lead.

While Lowe worked up an advantage late, Rispoli made one final push on the final lap but came up 0.524 seconds short of taking his first dirt track win in over a decade. Cose rounded out the podium in third.

But Briar Bauman broke up the impromptu Indian Wrecking Crew photo shoot when he seized control of the Main with a full nine minutes left on the clock. Once through, Bauman — who looked smooth and planted with everyone else seemingly teetering on the edge of control — never looked back.

Behind, Sammy Halbert (No. 69 Coolbeth-Nila Racing Indian FTR750) not only chased down Mees and Bronson Bauman, he actually pulled clear of them in second. There simply was no catching the champ on this evening, however, and Halbert was forced to accept a lonely second 2.203 seconds behind the winner.

Bronson Bauman appeared to line up Mees for a final-lap strike, but Mees countered, narrowly holding on for the final spot on the box by 0.021 seconds.

Briar Bauman’s triumph snapped Mees’ streak of Mile wins, which included all six on last year’s slate. Mees still holds a two-point advantage in the ‘20 standings however, after opening the season with a double victory at the Volusia Half-Mile.

After the race, Bauman said, “(Getting the Grand Slam) is really cool. This place is really special. I know a lot of us were excited to come back here and race on the Indy Mile. I didn’t think I’d ever get to do it again. It’s also Indian’s 50th win in the series, so for those to go hand-and-hand means a lot to me.

“This one goes out to the Garcia family. We lost one of our buddies (Jess Garcia) right before Volusia, and I wanted to win one there to dedicate to him, but Jared just laid it on us really bad. I didn’t think a Mile was going to be the one, but I guess Jess did. This one is for him.”

Next Up:
American Flat Track will conclude its first-ever Indy Mile doubleheader tomorrow evening with the running of the Indy Mile II. Gates will open for fans at 4:00 p.m. ET/1:00 p.m. PT on both days with the Main Event programs slated to begin at 8:30 p.m. ET/5:30 p.m. PT. Live coverage will again be available on any device via TrackPass on NBC Sports Gold 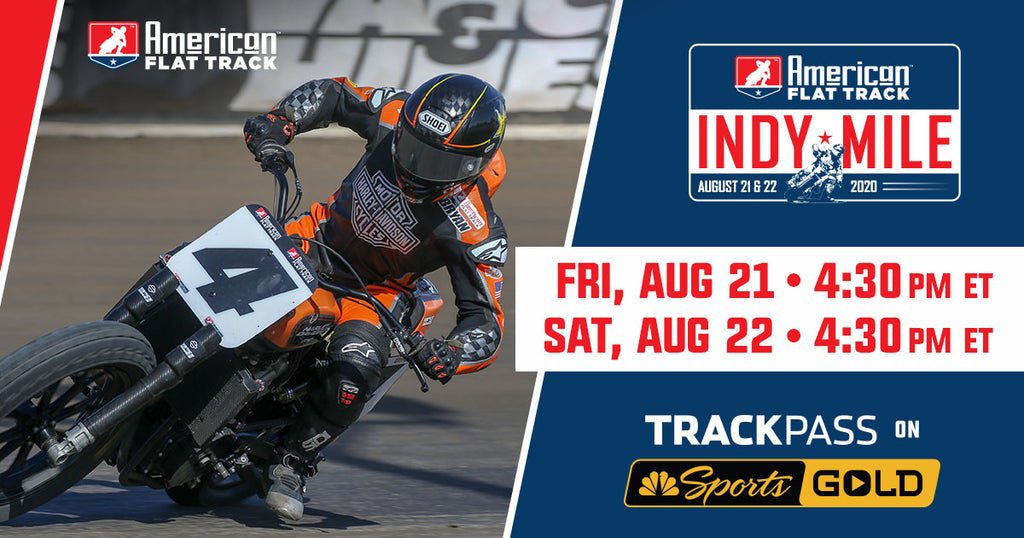