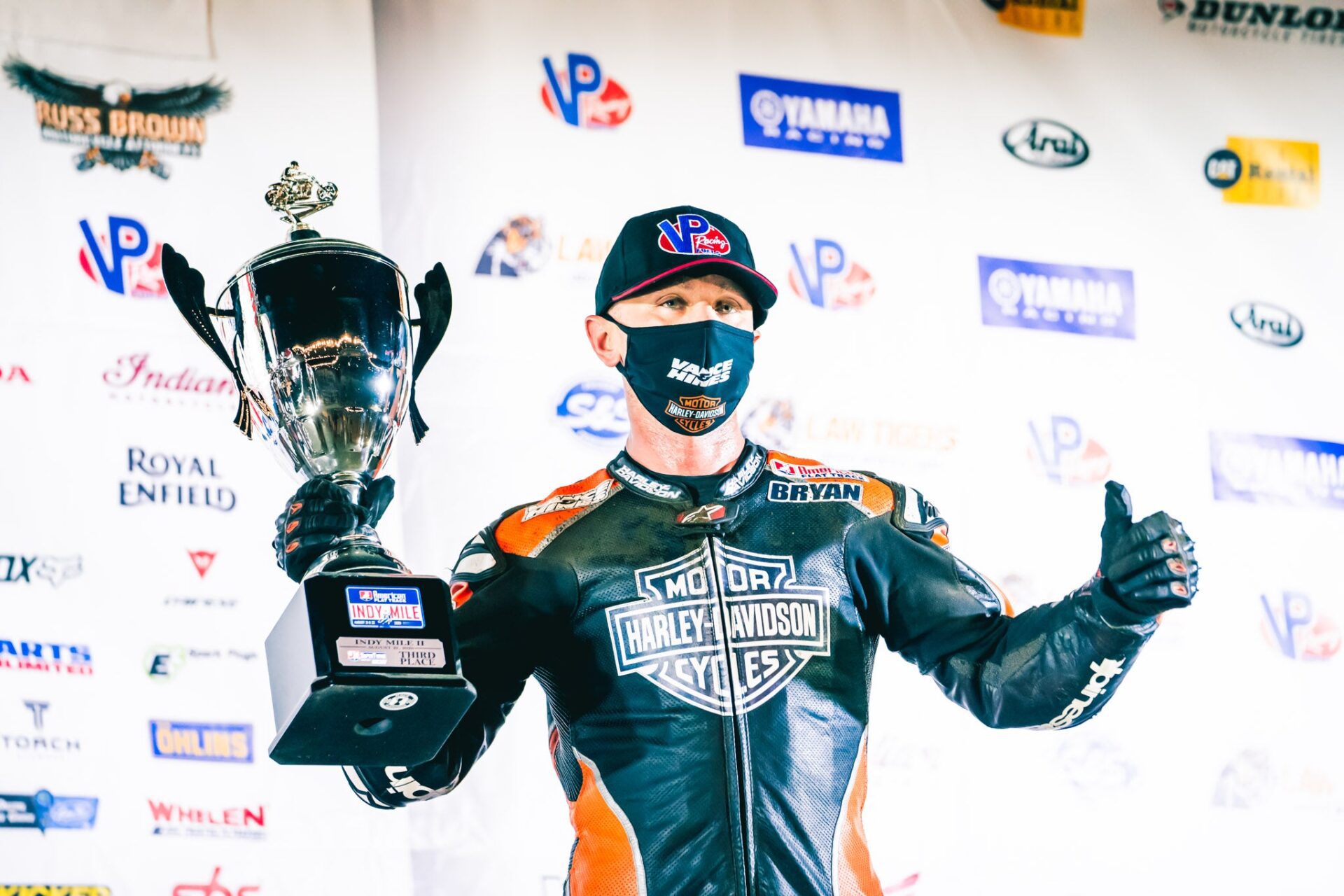 It took Briar Bauman (No. 1 Indian Motorcycle/Progressive Insurance FTR750) nine seasons in American Flat Track’s premier class to finally claim his maiden Mile victory and complete the career Grand Slam. It took just one day for him to earn a second.
Bauman completed the Indianapolis double with a tactical ride to win Saturday night’s AFT SuperTwins presented by Vance & Hines Main Event at the Indy Mile II.
Saturday’s rematch at the Indiana State Fairgrounds & Event Center took on a different shape compared to Friday’s Indy Mile I, as Jared Mees (No. 9 Indian Motorcycle/Progressive Insurance FTR750) was determined to prevent the reigning Grand National Champion from executing another early escape.
Lap after lap, Mees would dive back into the lead on corner entrance. Doing so not only kept Bauman corralled behind him, it also put him under threat with both Bryan Smith (No. 4 Harley-Davidson/Vance & Hines XG750R Rev X) and Brandon Robinson (No. 44 HCRR Racing/Ben Evans Racing Indian FTR750) running in close contention.
After taking and losing the lead on numerous occasions early, Bauman switched up tactics and spent the bulk of the second half of the race just waiting in third, leaving the Mile-proven virtuosos of Mees and Smith to exercise a well-known mutual rivalry.
After Mees had secured a solid lead ahead of a still-determined Smith, Bauman seized the opportunity to make the high line work to his advantage, powering past both living legends to rip open a multiple bike-length lead. Mees did his best to respond on the final lap but couldn’t quite muster enough pace to reel Bauman back to within striking distance.
Bauman took the checkered flag with 1.147 seconds in hand over Mees, while Smith earned Harley-Davidson’s first Mile podium for XG750!
Bauman said, “It’s pretty crazy. Honestly, I had both Jared’s and Bryan’s posters on my wall when I was growing up. I watched them every chance I could. Getting to race with them is a little bit surreal… The racing was clean and fast and the track was gnarly. All-in-all, it’s a dream come true.”
Robinson lost touch with the leaders with around three minutes to go but had built up just enough space to hold off a charging Sammy Halbert (No. 69 Coolbeth-Nila Racing Indian FTR750) for fourth.
Bronson Bauman (No. 37 Indian Motorcycle/Progressive Insurance FTR750), Jeffrey Carver Jr. (No. 23 Happy Trails Racing FTR750), Brandon Price (No. 92 Roof Systems of Dallas, Texas Indian FTR750), Robert Pearson (No. 27 R/J Performance Racing/Hite Trucking Indian FTR750) and Jarod Vanderkooi (No. 20 Harley-Davidson/Vance & Hines XG750R Rev X) completed the top ten.
Bauman’s twin victories move him ahead of Mees in what’s promising to be a season-long heavyweight title fight, 90-87. Halbert is a distant third with 66 points to his credit.

Henry Wiles (No. 17 RMR Honda/Honda Talon CRF450R) earned his first victory since transitioning to the AFT Singles presented by Russ Brown Motorcycle Attorneys class following one of the most entertaining races in recent memory.

As many as ten riders still held a shot at the win as the clock showed 0:00, setting up an epic final two laps to decide the race.

Long-time AFT Singles standouts Shayna Texter (No. 52 Red Bull KTM Factory Racing 450 SX-F) and Ryan Wells (No. 94 Waters Autobody Racing/D&D PowerSports KTM 450 SX-F) emerged late, both flashing the potential to steal the win away in the same fashion that Kitchen had the night before.

As the final lap played out, it became increasingly obvious the race would come down to a final straight shootout between Wiles and Zabala. Wiles worked hard to open up a small advantage through Turns 1, 2 and 3 but appeared vulnerable after making a slight bobble while exiting 4. Zabala pulled right up behind Wiles and then swung out of his draft with the checkered flag in sight. While he managed to speed up alongside his opponent’s bike, he didn’t have quite enough steam to complete the winning maneuver.

Wiles said, “We had some guys up there in the mix in the Main Event we hadn’t really seen all day. Cole was riding the wheels off his bike. I’m really happy to see him up here on the podium.

“The guys at RMR and American Honda have been giving us a good effort, and it showed up tonight. Everybody had been saying I’m kind of a big boy and genetically at a disadvantage, but we got it done tonight. I’m really stoked that I could come through.”

Despite narrowly missing out on the win, Zabala’s eye-opening effort still qualifies as a breakthrough performance; it not only marked his first career AFT podium, but his first-ever top-five in the series.

After an unfortunate mechanical, title hopeful Mikey Rush (No. 15 Estenson Racing Yamaha YZ450F) finished an uncharacteristic 15th. As a result, Wiles now leads Kitchen 68-65 with Texter jumping up to third with 58 points.

James Rispoli (No. 43 Latus Motors Racing Harley-Davidson XG750R) got a second chance to end his run of AFT Production Twins second-place finishes. He responded by winning by more than 12 seconds in an absolute show of force.

“The Rocket” had been knocking on the door ever since returning to dirt track in 2019 after assembling a national championship-winning roadracing career. He notched up four podiums a year ago, and opened his 2020 campaign with three consecutive runner-up finishes.

Rispoli established himself as the heavy favorite on Saturday night, topping both qualifying sessions and running away with his Semi. Despite the lofty expectations set by his pace, he was quickly swallowed up and shuffled back to fourth as the Main Event got underway.

The race was completely reset, however, following a Michael Inderbitzin (

At least they did until both riders found themselves outclassed by reigning class champion Cory Texter (No. 1 G&G Racing/Roof Systems Yamaha MT-07), who sailed past and then eked out a gap on the final lap to finish as the race’s runner-up.

Texter’s late-race flurry helped minimize the championship damage, but it wasn’t enough to prevent Rispoli from taking a commanding lead of the early-season title fight. Rispoli now leads with 85 points to Texter’s 76 while Lowe sits third with 68.

Both of this weekend’s races will air on NBCSN, with the Indy Mile I airing on Thursday, August 27, starting at 1:00 a.m/10:00 p.m., and the Indy Mile II to follow on Saturday, August 29, at 12:00 a.m. ET/9:00 p.m. PT. The broadcasts will include exclusive features, cutting-edge aerial drone and onboard footage, and the expert commentary of AFT legend Chris Carr. 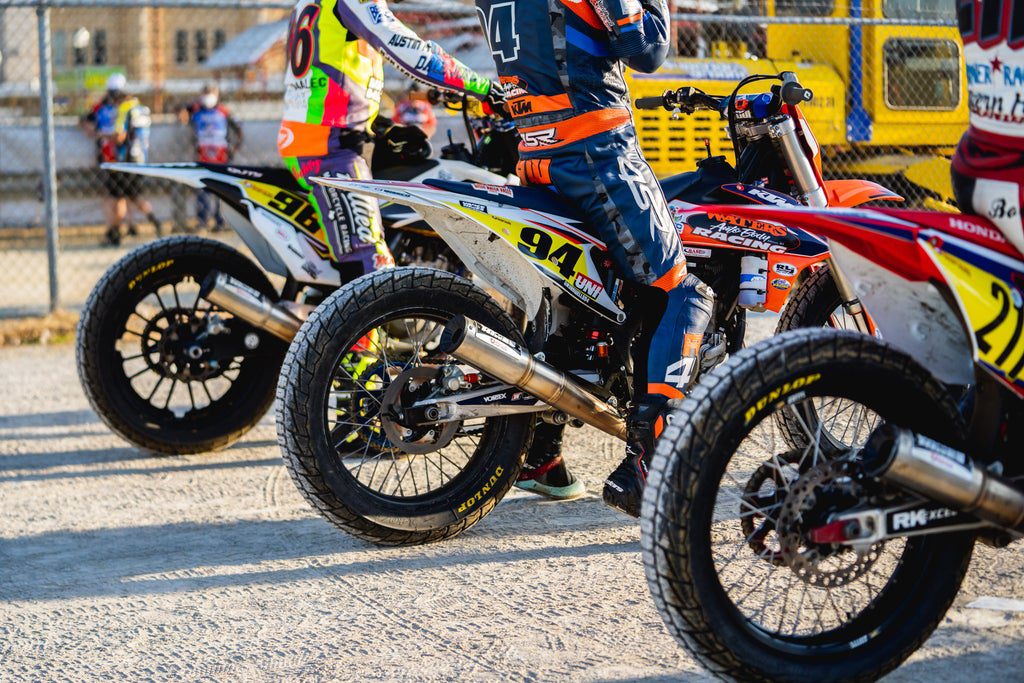