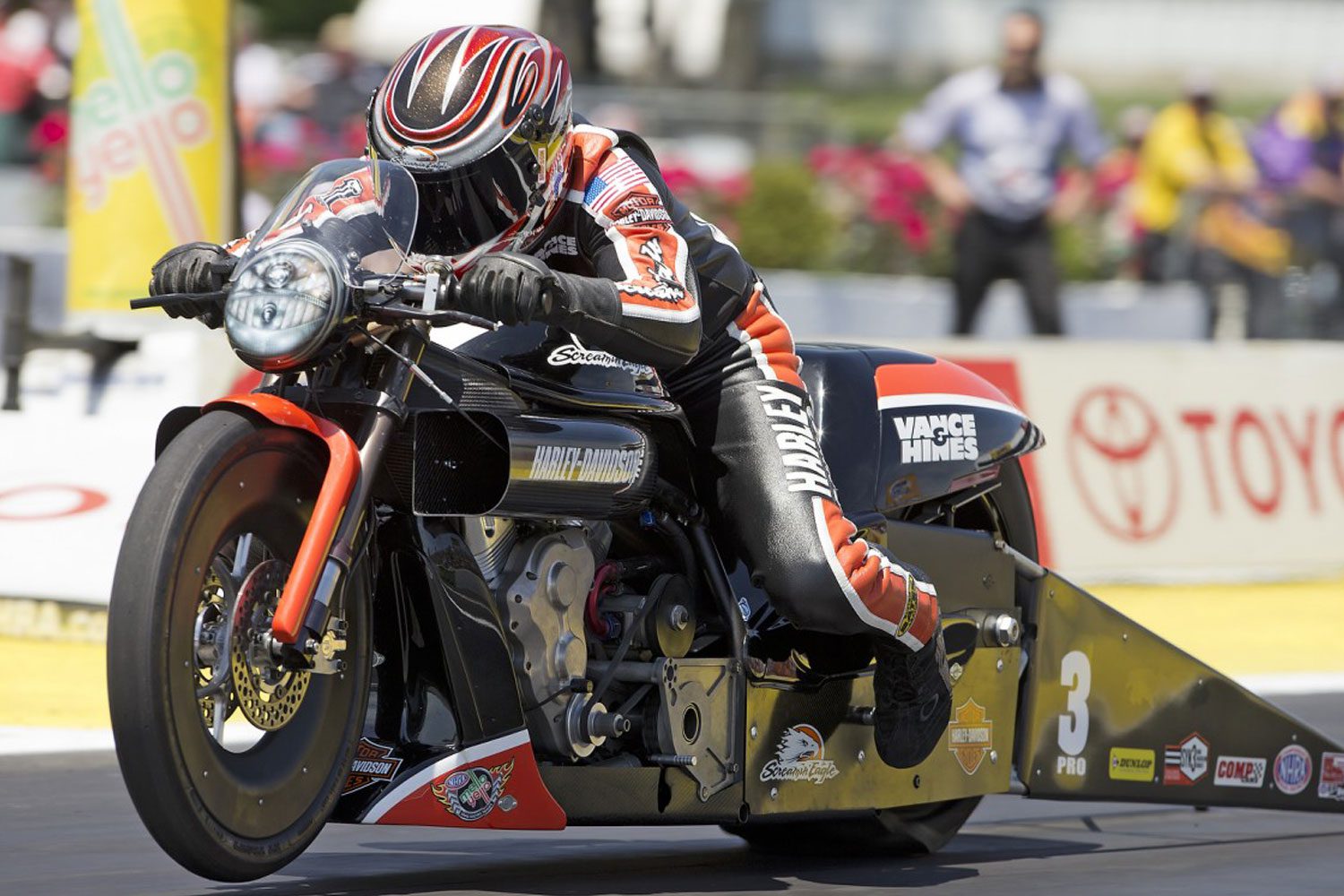 Courtesy of Harley-Davidson
MOHNTON, Pa. (Oct. 5, 2014) –Harley-Davidson® Screamin’ Eagle®/Vance & Hines rider Ed Krawiec won the Pro Stock Motorcycle final at the NHRA Nationals at Maple Grove Raceway. Winning for the fifth time this season on a Harley-Davidson® V-Rod® motorcycle, Krawiec is in second place and just 25 points behind his teammate, Andrew Hines, with two events left in the NHRA Mello Yello Countdown to the Championship playoffs.

“I didn’t have the fastest bike this weekend, but my V-Rod was very consistent,” said Krawiec. “We ran 6.806, 6.806 and 6.809 in the first three rounds, and as a racer that makes me feel very comfortable, and I can just focus in riding the bike.”

Hines seemed to have the bike to beat on Sunday after notching a first-round win over Modern Outlaw/Riding Dirty Suzuki rider Joe DeSantis and setting quickest Elapsed Time (ET) and top speed with a 6.770-second/197.91 mph blast in round two to dispatch Star Racing Buell rider Chaz Kennedy. But Hines’ day came to a sudden end in the round-three match with Petrolhead Apparel Buell rider Scotty Pollacheck when he fouled at the start and his motorcycle simply quit running.

“My bike was misfiring as we came to the starting line in round three, and that threw me off my routine,” said Hines, who was the top seed for the Countdown. “That caused the red light, but then the bike just quit. It’s must be some intermittent electrical problem, because when we got back to the pits it started right up.”

Krawiec advanced through Sunday eliminations with wins over Shawn Gann on the PiranaZ Racing Buell and Protectthe Harvest.com/MAVTV Buell rider Adam Arana in rounds one and two, and moved to the final when Nitro Fish Buell rider Matt Smith fouled at the start in round three. Krawiec then notched the 27th final-round win of his career with a 6.793-second run to defeat Pollacheck’s 6.853-second effort.

The NHRA Countdown the Championship continues on Oct. 30-Nov. 2 at the 14th annual NHRA Toyota Nationals at The Strip at Las Vegas Motor Speedway in Las Vegas, Nev.