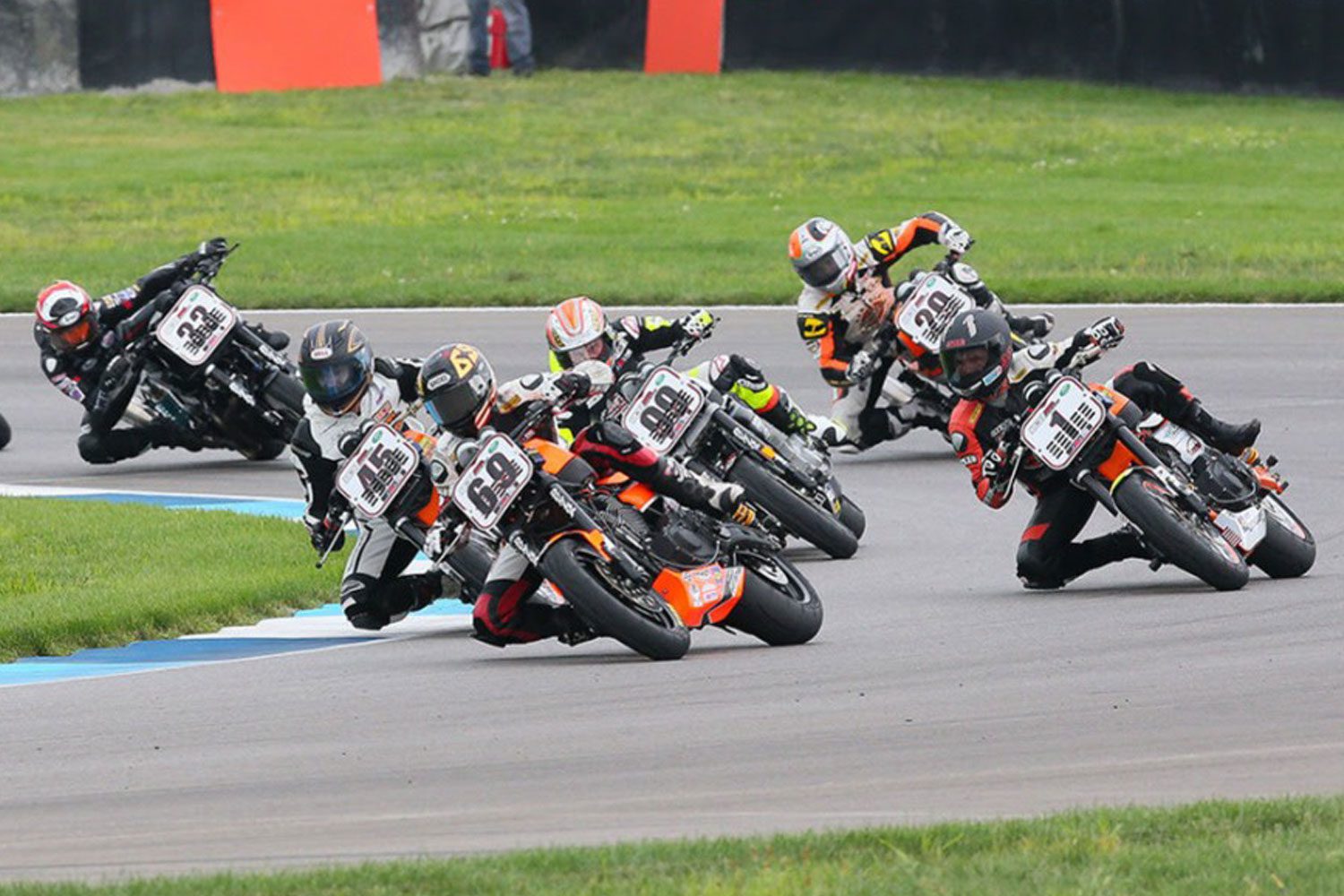 DAYTONA BEACH, Fla. (Aug. 15, 2014) – The AMA Pro Vance & Hines Harley-Davidson Series has quickly established itself as one of the highlights of the Red Bull Indianapolis GP weekend, and this year’s doubleheader did not disappoint. For fans that like bar-to-bar racing and outcomes in doubt right up until the checkered flag drops, last weekend’s races produced in spades.

The Indy event is unique for the riders of the AMA Pro Vance & Hines Harley-Davidson Series. While the class usually wages just one contest per race weekend, in Indianapolis, the single-make class and its riders are twice thrust into the spotlight as the sole AMA Pro representative of the high-profile event.

With the world watching, Jeremy McWilliams and Steve Rapp came away from the ultra-competitive contests at the Brickyard with a hard-earned victory each.

Rapp, the reigning series champ, finally achieved a goal that was a long time coming. The Californian had been a constant presence up front at the Brickyard but repeatedly found himself the loser in the drafting battle down the long start/finish-line straight that determines the final results. Rapp had shown plenty of pace before, but was just in the wrong place at the wrong time.

On Saturday, Rapp found the familiar refrain as he ran in the lead pack. The Suburban Motors Harley-Davidson ace was yet again shuffled completely off the podium on the race’s final lap.

However Rapp finally broke through the following day. He jumped past both Benny Carlson and series point leader Danny Eslick at the line to win by just 0.011 seconds.

“To win at Indy finally – I wanted to check that off my list,” Rapp said. “I’m running out of time and I finally got it, so that’s cool.

“I had a lot of years to practice where not to be. I could tell going down the back Danny sat up but I didn’t want anything to do with it either so I sat up. Ben went by and I was like, ‘cool, that works.’ We got back in line and I wasn’t sure if I was going to pass them but it worked out pretty good. They got next to each other and built a little draft there. It went great.”

McWilliams, a Northern Irishman with a long career in Grand Prix and the 2010 UK Harley-Davidson XR1200 Trophy Champion, won on Saturday. At 50 years old, McWilliams showed no signs of slowing down as he backed up the popular win he scored at the venue last year for the Harley-Davidson of Bloomington squad.

McWilliams ultimately won out in the slipstream over Rapp’s teammate Carlson, on the last lap by 0.083 seconds back after ten laps.

McWilliams later admitted that he almost blew it on Saturday. He went too hard too quickly and left little in reserve for the end.

“You put a bit of pressure on yourself when you start from pole because I suppose you’ve done all that work and you don’t want to give it away on the first lap,” McWilliams said. “So I got the hammer down and stupidly thought I could break away. I gave it everything – I tried to maintain the tire a little bit but to be honest, that didn’t really work – Benny caught me.

“He taught me a few things when he got through – he was just using his superior height to get the bike back on the big, fat part of the tire and I thought if he keeps doing this, we’re going to be in trouble. So I had to keep working hard to get back on him on the last sector, because once the draft’s broken, it’s gone. I’m lucky Bloomington Harley gave me a bike that can stay in the draft. It’s as good as it was last year and it’s a pleasure to ride. That’s a big weight off my shoulders to get a win here. I just wanted one again because it’s such a special place to do it.”

While he didn’t add to his victory total on the weekend, Ruthless Racing pilot Eslick was a winner in the larger scheme. He now leads the points by 16 over Carlson (159-143) with just the New Jersey finale to go.

On Saturday, title leader Eslick scrapped with Tyler O’Hara, who came into Indy ranked second in points, for position on the track. Although out of the lead group, Eslick was able to gain a point on O’Hara in finishing seventh to the Californian’s eighth.

On Sunday, Eslick took second while O’Hara crashed out.  The Oklahoman leapfrogged Carlson for the lead on the last lap but then had the same technique shown to him by Rapp.

Eslick saw his place in the points flash before his eyes in the first part of the race.

“There was lots of crazy stuff on the first start,” Eslick said. “McWilliams missed a shift and I had to swerve to go around the outside of him. I had a couple-of-hundred-yard tank slapper, which is an eye-opener when you’re in the lead of the championship. I tried to calm down and settle in and then we had the red flag. Everyone had their strong sections of the track and we had to figure out where we wanted to be for the run to the finish line. I was on the lead on the back straightaway and I wanted no part of the lead through the last section of turns and onto the front straight. I sat up and pulled off to the side and let Benny go by. I tucked back in line and thought I had enough. I got by Benny but Steve came by and caught the draft perfect. It was a great race and these guys rode awesome.”

Carlson rode well once again, was the only double-podium rider on the weekend and came very close to earning his elusive first AMA Pro Road Racing victory. The Wisconsin native made it to the front on the last lap both times out only to lose out in the final draft to the stripe.

“It was the second day coming on the front stretch in first and it ended up working out not so well,” Carlson said. “Nonetheless, being on the podium two days in a row is an ultimate result and we moved up in the championship; it doesn’t get much better than that.”

“I just wished we would have knocked down Danny or something,” Carlson added in jest. “But hey, it was great.”

In the weekend’s opening race, Wyman made a charge to the podium as he ran down the front-running group from nearly three seconds back.

“I just showed up a little late to the party,” said Wyman. “I didn’t really get a bad start, but I was on the third row and got caught up with a couple of guys. By the time I was free, I had lost some ground. I knew we had a little better tire life on our bike with our Nitron shocks, so that was the key for me. I knew if I stayed consistent with fast laps and didn’t make any mistakes, the tire life would be in my favor. The last laps, those guys slowed down and I stayed the same. It allowed me to make two passes on the last lap. I would have liked to have seen what I could have done if I had been up there from the get-go.”

Malaysian teen Ramden Rosli showed plenty of speed in his first trip to Indy. The Grand Prix hopeful came up short of greater glory in getting shuffled to fourth on Saturday and – as often happens to Harley-Davidson Series newcomers still learning the limits of the big XR1200s – he crashedon Sunday.

Hayden Schultz earned his best result of the season with sixth on Sunday. The Chili Pepper Racing young gun learned the ropes on Saturday while racing with Eslick and O’Hara. On Sunday, he took advantage of the red flag to claim sixth.

“On the restart, another rider fell coming onto the front straight,” Hayden said. “Everyone scattered and I was lucky to keep from getting taken out myself. I put my head down and was able to pull a half-second gap on the guys behind me for sixth place. I’m happy with that!”

With just New Jersey Motorsports Park left on the schedule, Eslick appears to be the strong favorite to win his second AMA Pro Vance & Hines Harley-Davidson Series title. A deep field with plenty of motivated competitors might have something to say about that, however.