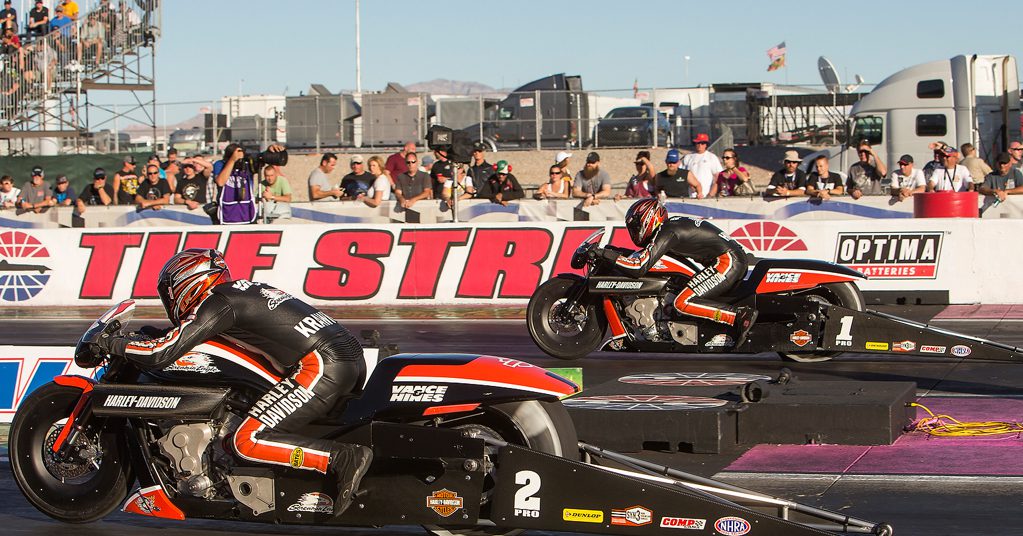 Dreamchaser Racing/Deschutes Brewery rider Janette Thornley snatched the Pro Fuel Harley title with a clutch performance at the finals. Thornley, of Statesville, N.C., started the weekend trailing class leader Dennis Fisher by five points. Thornley won in the first round of eliminations and clinched the title when Fisher lost his first-round match. Thornley advanced to the final round of eliminations before losing to defending Pro Fuel champion Johnny Vickers. Thornley, who was awarded an NHRA Wally trophy for her championship, notched four event wins during the season and scored 623 points. Fisher finished the season in second place with 595 points, followed by David Larson with 315 points.

A monster season earned Akea/Ray Price Motorsports rider Tommy Grimes Jr. a second-consecutive NHRA Wally trophy in the Top Fuel Harley class. Grimes, of Winston-Salem, N.C., guided his roaring Top Fuel Harley to the winner’s circle five times in 2015 and clinched the title before the Las Vegas event. Grimes advanced to the second round in Las Vegas before losing to Javelina Harley-Davidson rider Ricky House, who went on to win the final. Grimes finished the season with 617 points. Len Darnell Jr. was second with 414 points, and Joseph Sternotti Jr. was third with 299 points.

“All of the Sportsman Harley drag racers bring power and passion to the starting line at every event,” said Kris Schoonover, Racing Manager, Harley-Davidson. “Harley-Davidson Screamin’ Eagle performance parts help these talented racers build some real V-Twin muscle into amazing drag-racing bikes that have thrilled Harley fans all season at tracks across the country.”