NHRA POWERS INTO FLORIDA FOR THE GATORNATIONALS

Fans in the Sunshine State will be in for a treat at the circuit’s traditional East Coast opener at Gainesville Raceway as the world’s best drag racers power their 10,000 horsepower, fire-breathing machines down the strip in pursuit of championship points and early-season momentum. Spencer Massey (Top Fuel), Ron Capps (Funny Car), Greg Anderson (Pro Stock) and Karen Stoffer (Pro Stock Motorcycle) were last year’s winners of the event that will be televised on FOX Sports 1, including live finals coverage at 1 p.m. (ET).

The excitement and energy of NHRA racing on the track will be as adrenaline-pumping as ever, but in 2016, the NHRA Mello Yello Drag Racing Series is shifting gears and venturing boldly into a brand new era. It’s one of the most eagerly anticipated seasons for the NHRA community in many years.

New TV partner FOX Sports will aim its cameras at the exciting side-by-side racing on the dragstrip and showcase the sport with live coverage of Sunday eliminations at 17 events – including the Gainesville race – and provide more than 500 hours of NHRA programming on its family of networks. There are new rules for the Pro Stock category that will help the factory hot rods recapture the 200 mph magic that makes the class a fan-favorite. There are many new rules in place to improve competition in other classes, and there’s even a bold new NHRA Mello Yello Drag Racing Series logo.

In addition, NHRA will ask its legion of fans and highly-skilled drivers what they love about the sport in the new “MY NHRA is…” marketing campaign. NHRA’s celebration of the 50th anniversary of Funny Car is sure to be a fan-favorite attraction as well.

While there will be a lot of newness floating around the Gainesville track during the event, one thing fans can count on is the same high-intensity, drama-filled competition that they have become accustomed to.

Gainesville Raceway never fails to disappoint, as it has long been known as one of the fastest tracks on the NHRA circuit. The legendary track is home to the first 260-, 270- and 300-mph Top Fuel runs, while perhaps the most memorable of those was Kenny Bernstein’s historic first 300 mph Top Fuel pass in 1992. With so much history around the track, drivers at this year’s Gatornationals will be inspired to make some history of their own.

The Pro Stock Motorcycle class will make its 2016 season debut at the AMALIE Motor Oil NHRA Gatornationals. The two-wheeled class races at 16 events throughout the season and provides some of the series’ most thrilling action. Pro Stock Motorcycle racers will be looking to start fast, and many will have their crosshairs on reigning world champ, Andrew Hines. 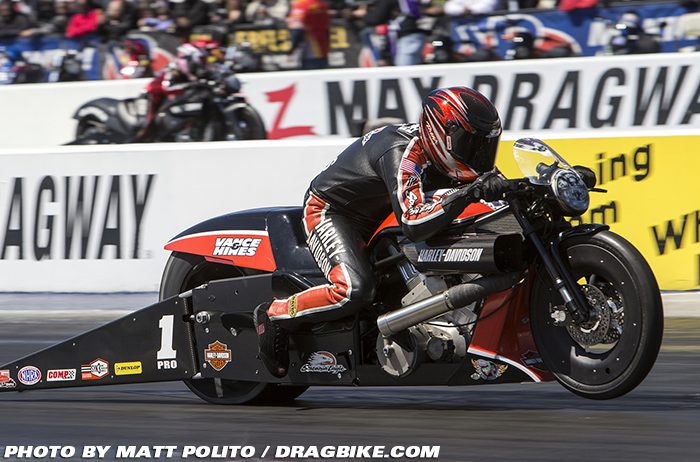 Hines powered his Screamin’ Eagle Vance & Hines Harley-Davidson to four victories last season en route to his second consecutive world championship and fifth of his career. Hines hasn’t won the Gainesville event in more than a decade, so he’ll have his eyes set on a return to the winner’s circle. Trying to prevent him from getting there will be teammate and three-time event winner Eddie Krawiec, 2015 event winner Stoffer, Louisiana alligator farmer Jerry Savoie, and two-time world champion Matt Smith.

The event also will serve as the season-opening race for the NHRA J&A Service Pro Mod Series and feature plenty of thrilling competition in the NHRA Lucas Oil Drag Racing Series.

WHERE: Gainesville Raceway, Gainesville, Fla. The track is located on 11211 North County Road 225 in Gainesville.

WHEN: Thursday through Sunday, March 17-20