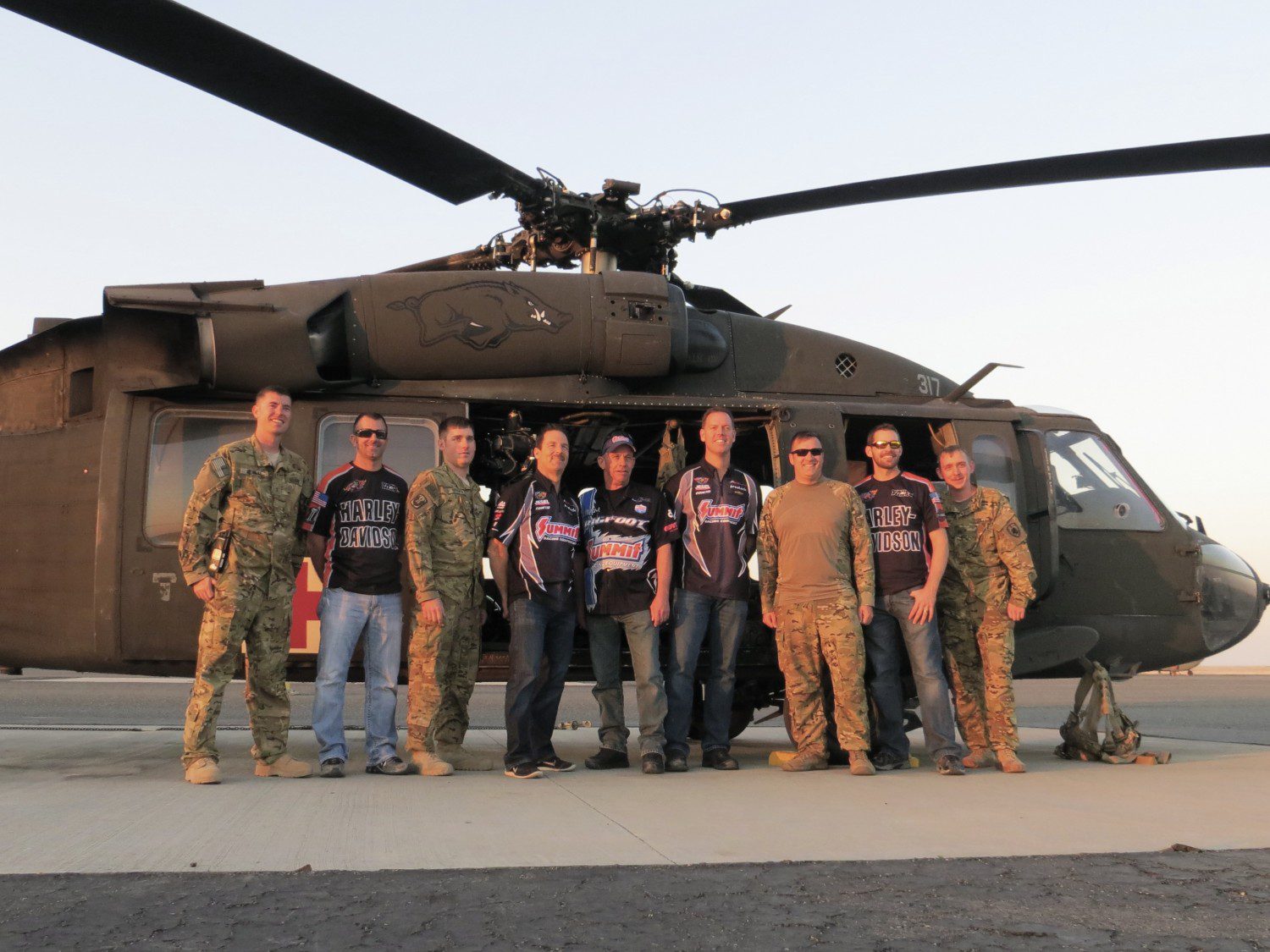 Courtesy of On All Cylinders
Summit Racing Pro Stock drivers Greg Anderson and Jason Line,  Harley-Davidson Screamin’ Eagle Vance & Hines Pro Stock Motorcycle riders Andrew Hines and Eddie Krawiec, and 25-time BIGFOOT® 4×4 Monster Truck champ Dan Runte are well entrenched in this year’s Operation Appreciation, Summit Racing’s annual trip to visit troops overseas. For each of these drivers, the trip has become an eagerly anticipated event, and one in which they are afforded the opportunity to connect with and say thank you to a group of very important individuals – the men and women of our Armed Forces stationed in remote locations far from home.

As the tour begins, the haze of a long journey the day before quickly fades for the drivers as representatives from Armed Forces Entertainment guide them to their first destination. This year, Operation Appreciation begins at Camp Buehring in the northwest region of Kuwait. 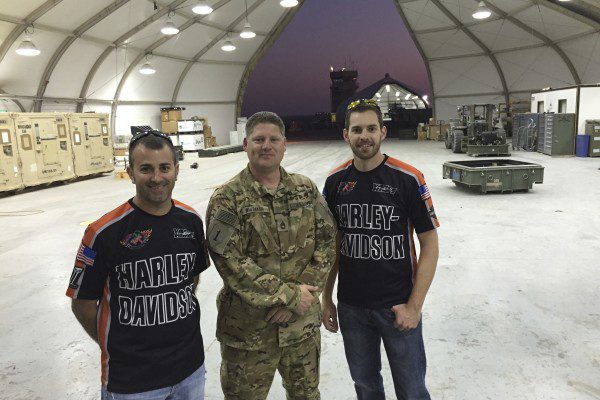 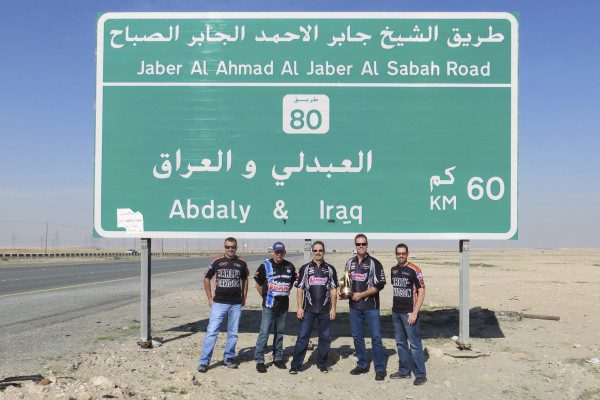 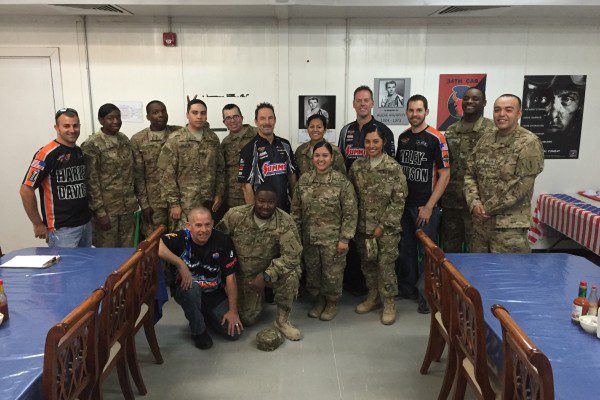 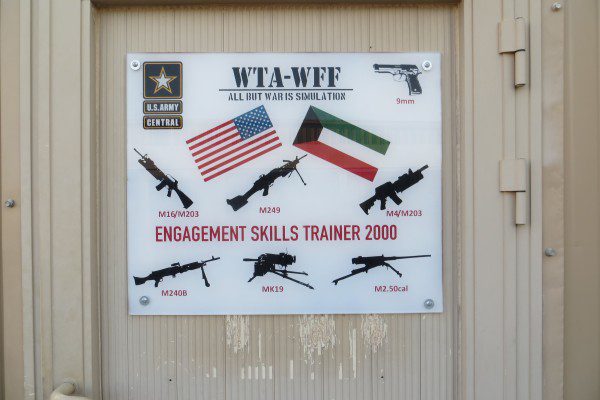 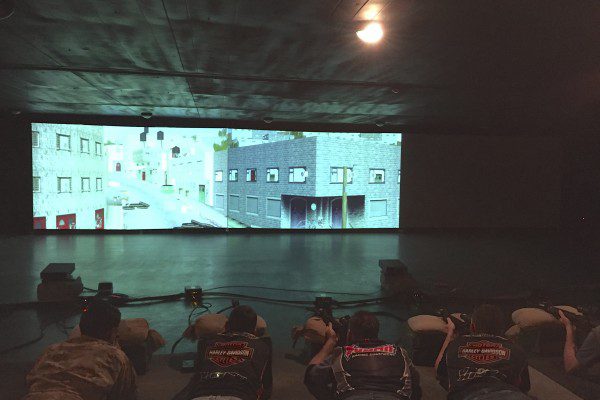 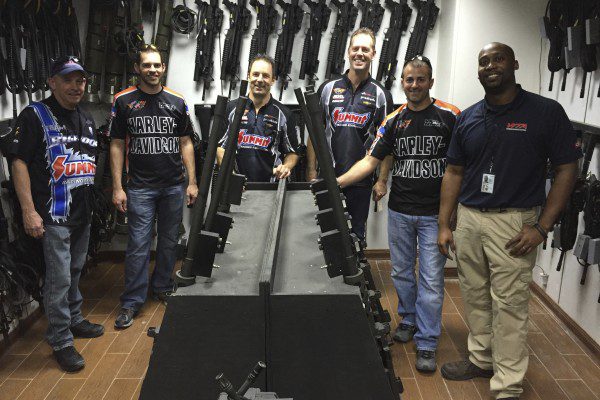 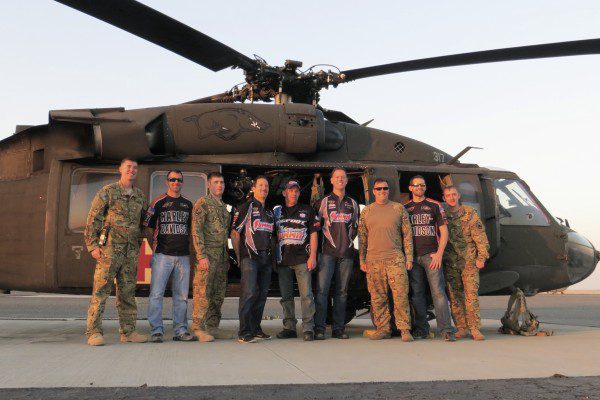 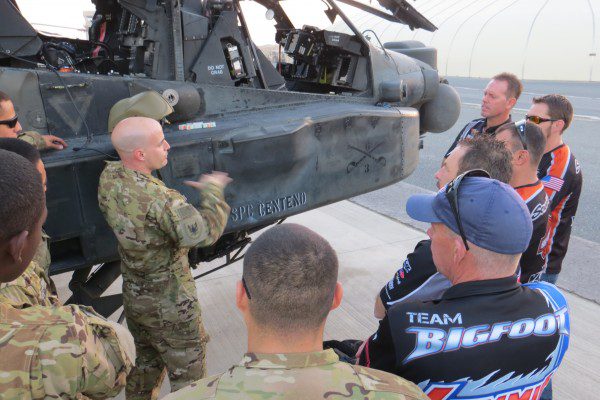 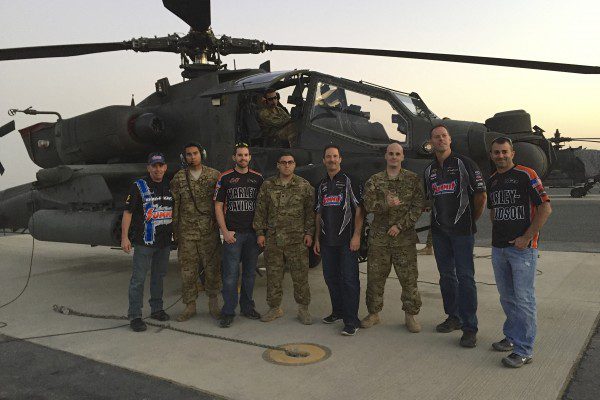 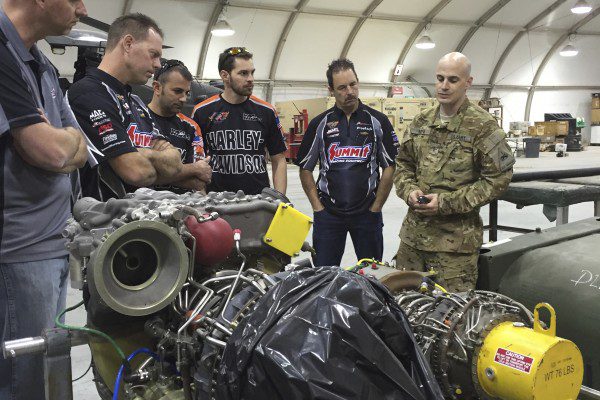 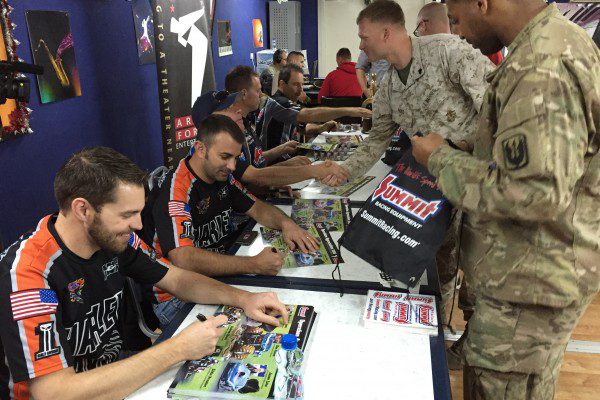 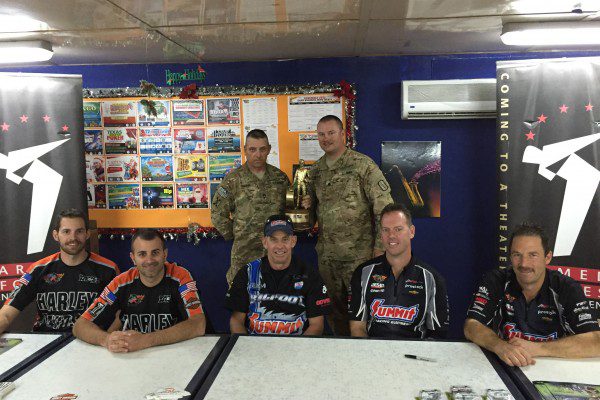 Fresh from winning a fifth world championship aboard his Harley V-Rod in NHRA’s Mello Yello Drag Racing Series, Hines shares his perspective of Day One of the trip below:

“We had a chance to come here a couple years ago, but the problem was that we brought a 30-year flood with us. We weren’t able to see as much of the base as we hoped, but this year was a lot different. We had good weather, and everyone was in great spirits. A lot of the troops we visited with told us that four or five months ago, it was really hot there – much hotter than we experience on any regular basis, and hotter than a lot of folks will ever experience. The men and women we talked to were really loving the fact that they have comfortable weather to work in right now.

Today was fun and exciting, and we got to meet some interesting characters. We visited with a few of the people in military weapons training, and we got to experience the simulated firing of weapons firsthand. They gave us some great insight into that program – it’s not every day you get to pick up an M240B machine gun and shoot at simulations. We learned that troops are able to spend a lot of hours in training with no added cost thanks to this program, and that the simulated training translates right over to actually firing their real weapons. It was nice to see that they have found a way for cutting expenses to lead to performance advantages.

We also had the opportunity to go out to the flight line and meet the Blackhawk medic team. I have a lot of respect for those guys. It’s their job to make sure people who are injured get out safe and to an area where they can get the medical attention that they need. They take care of everybody behind the lines, and it was neat to see their “office” up close and talk to them about what they do.

After that, we got to experience seeing an Apache helicopter up close. When I was U.S. Army JROTC in high school, I got to see a live-fire exercise involving an Apache, but I had never seen one up close until today. We got to talk to the chief mechanic/pilot and his whole crew that maintain the ship. It’s interesting to see how much work goes into those things. It’s just like how we work on our race bikes and cars; a lot of maintenance for the time that we get to run them. They told us that for every one hour of flight time, there are eight hours of maintenance. That sounds a lot like how we operate, spending hours working for just six- or seven-seconds of action. A lot of technical skill and know-how goes into what they do, and those guys do a great job keeping those things up in the air.

We ended the day with a great autograph session there at the MWR Oasis. We met a lot of great people, but the first thing we noticed was one Sergeant First Class (SFC) who just lit up when we walked in the door. He was standing there holding a Harley-Davidson book, and he just wanted an autograph. He came back later and gave us one of his challenge coins, and that was really special.

Harley-Davidson is a name well-known, and not just in the United States. People bring their love of the brand over here with them, and we meet so many people who want to talk to us about the V-Rod. There seems to be a huge following in the military. I didn’t realize how big that following really is, but a lot of the troops we talked to were eager to talk to us about their V-Rod or tell us about the V-Rod their Sergeant or Lieutenant has, or tell us that they are saving up to get one when they get home. A lot of these folks are saving up for toys, and it was nice to hear how many of them are going to be Harleys.”

This is a great chance for us to say thank you to these men and women for all that they do for us. They’re excited to see us, but really, we’re just happy to be there. I have a tremendous amount of respect for our military personnel, and it’s tough seeing them over here away from their families, but they always have a smile on their face are ready to get back to it.

I’m looking forward to tomorrow and the rest of this trip. It’s always an enjoyment being out here and having the opportunity to tell the troops how glad we are to be here, to shake their hands, and to talk to them. They think we’re just saying that, but I really do enjoy this visit and hearing their stories. It’s a lot different than when they come up to the ropes at a race. There we get to brag about our motorcycles, but we come here and get to hear about them and what they’re part of and proud of. It’s a life-changing experience, that’s for sure.”