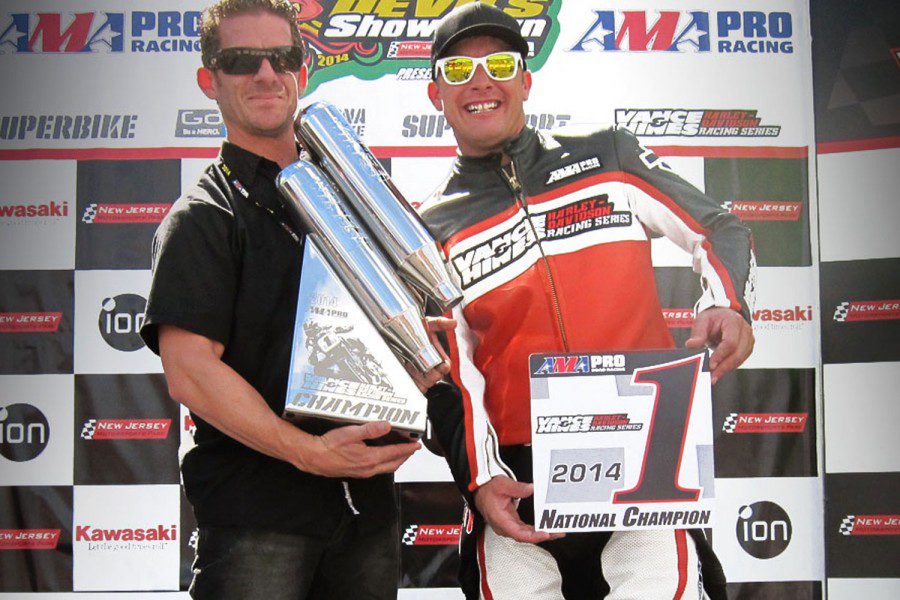 Eslick came into the weekend needing just a seventh place or better to assure himself the crown, but a major crash in this morning’s qualifying session put his participation in doubt.

His team rebuilt the motorcycle in time for Eslick to hurriedly take the grid from the back row, from where the beaten and bruised Oklahoman battled his way forward.

He crossed the line in sixth at the checkered flag to become the Series’ first two-time champion.

“I ran off the track and wadded it up in the wet grass this morning and pretty much destroyed that motorcycle,” Eslick said. “The Trev Deeley/Ruthless Racing team busted their butts from the time I crashed the motorcycle until the moments before the race. We were pretty close to not making it.

“I’ve ridden it three seasons now and that’s the first time I’ve crashed it. It’s bound to happen and the way these guys are riding – they’re riding incredibly. The level that this Vance & Hines Harley-Davidson Series has risen to is unbelievable. I used to be able to play around and sandbag a little bit and still have a shot at it, but now you really have to be on your game and work on your set up. Hats off to everybody out there.”

Eslick’s run was far from the only entertainment the day’s contest provided. Up front, a five-rider dice took shape for the win. However, title hopeful Suburban Motors Harley-Davidson’s Ben Carlson was effectively dropped from contention for the win when he was assessed a penalty for anticipating the start. Likewise, NJMP master Shane Narbonne of the Six-Four Motors squad ran off track, costing him precious time and a place in the lead pack.

Wyman slashed into the lead as the two hit slower riders and made the most of the opportunity to drop Rapp and close out the year with a win. Rapp took second, followed by O’Hara, Narbonne, Carlson and Eslick.

“I tried to put my head down from the beginning,” Wyman said. “I got the holeshot from the second row and did my best to push as hard as I could for a whole lap. But Steve came flying by on the front straightaway, and from that point I knew the race was going to be a little different than I wanted it to be. It turned into a pack and I sat there through the middle part of the race. It was getting crazy up front and I just wanted to make sure I didn’t get caught up in any of that.

“I basically put myself in the right place at the right time at the end. I made a push to the front and I got the lead just as we hit the lappers. The lappers are going to be either way – they’re going to hold you up or give you a big gap. They gave me a gap and I put my head down the last two laps and it worked out great. I’m so happy to get another win this year.”